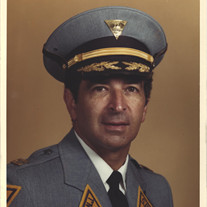 Retired NJ State Police Captain Alfred G. Piperata, Badge #1490, passed away into the kingdom of God on Monday, July 27, 2020. He was 94 years old.   Son of the late Frank and Francine (Viscomi) Piperata of Phillipsburg, NJ.   A US Navy Veteran of WWII, he served in the Atlantic Theater of Operations on a Patrol Gunboat and then in the South Pacific aboard an Amphibian Assault Ship. He was awarded the Asiatic Pacific Theater Ribbon, the European Theater Ribbon, the American Campaign Medal, the Victory Medal, the Navy Good Conduct Medal, the NJ Military Distinguished Service Medal and the Warren County Distinguished Military Service Medal. After his discharge, he became a Phillipsburg, NJ Police Officer, then enlisted in the NJ State Police where he served throughout NJ in Troops C and B and then Division Headquarters as an aide to Colonel Clinton Pagano. He was later assigned to the Criminal Investigations Section and served in the Organized Crime Task Force Bureau, Corruption Control Bureau, Trial Preparation Bureau and after his promotion to Captain, was the Chief of Internal Affairs Bureau. During his State Police career, he was awarded 10 State Police commendations and received a NJ State Senate resolution for Distinguished Service.   A graduate of Phillipsburg High School, he later attended Trenton State College and Rider University. After his retirement from the State Police, he accepted a position as Employee Benefit Administrator for the Central NJ Teamster pension fund. He assisted the US Labor Department Strike Force and was a key federal witness in their investigation and subsequent trial of pension fund attorneys and trustees when he uncovered a twenty million dollar fraudulent investment scheme. He was then appointed an Administrative Assistant to the Commissioner of the NJ Department of Corrections, where he developed and implemented their random substance abuse screening program. He served on Governor Thomas Kean's Cabinet Task Force to develop and implement random drug testing in the Criminal Justice Workplace. He was President and founder of Gemini Investigative Services, Inc.   He was a member of the National Association of Legal Investigators, the Council of International Investigators and the NJ Private Detective Association. He was an exempt member of the Reliance Fire Company and an exempt member of the Phillipsburg Emergency Squad. He was also a member of the American Legion Post 314, the Veterans of Foreign Wars Post 15031, the Navy League and the National Former Troopers Association. As a member of the NJ State Police Former Troopers Association, he served as a Director of their educational fund. An avid sports enthusiast, he played minor league football and was a ranked tennis player in NJ and the Middle States Tennis Association. He is a member of Our Lady of Good Council Roman Catholic Church in West Trenton, NJ and Our Lady of Assumption Church Dioceses of Corpus Christi, Ingleside, TX.   He is survived by his wife; Barbara Jean of West Trenton, NJ, a daughter; Karen and two grandchildren; Olivia and Oliver of New York City, his sister-in-law; Eleanor Piperata of Fullerton, CA, step-son; Roy Ricketts III of Scranton, PA, as well as, several nieces and nephews from California, Florida, Indiana, North Carolina and Phillipsburg, NJ. He was predeceased by his brother; Dominic of Fullerton, CA and Frank of Phillipsburg, NJ, his sisters; Theresa Cilia, Mary Antoinette Pizzari and Gloria Farringer, as well as, a step-son Troy Moran of FL. In lieu of flowers, memorial contributions may be made to the N.J. Former Troopers Heritage Foundation, Inc. PO Box 7852, West Trenton, N.J. 08628   Alfred's entombment and services will be private. www.murphyfh.com

The family of Alfred G. Piperata created this Life Tributes page to make it easy to share your memories.

Send flowers to the Piperata family.