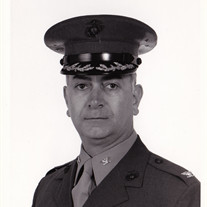 Colonel Angelo V. Candelori, 81, of Trenton, passed away peacefully on Thursday, February 21, 2019. He lived a full and rewarding life. Angelo was born on December 6, 1937 in Riverside, New Jersey, and was the son of the late Leocadia (Alice) Ciemnolonski and Angelo Candelori. To his family and friends, he was known as Bumpy. To his grandchildren he was Nunnu. He graduated high school in 1956 from Bordentown Military Institute (BMI) in Bordentown, NJ. He reached the rank of Cadet First Captain and Battalion Executive Officer, second in command of the entire BMI Battalion. It was at BMI where he decided to make a career of the military. Angelo attended Pennsylvania Military College (PMC) in Chester, PA, earning a Bachelor of Arts degree in June 1960. He was a member of the Pershing Rifles precision drill team. During his junior year, his team won the coveted national title of National Basic Standard Drill Champions. His team repeated the following year walking away with all three national titles, Basic Standard Drill, Trick Drill and Individual Basic Drill competitions. He attained the rank of Cadet Captain and Company Commander of Company C. He proudly served for 32 years in the United States Marine Corps reserves, retiring in 1990 with a rank of Colonel. Angelo was one of the original members and past Executive Vice President of the Marine Corps Scholarship Foundation, a non-profit organization that has raised millions of dollars towards scholarships to need-worthy children of Marines. He worked at Princeton University, Plasma Physics Laboratory for 33 years, serving as Business Manager, Compensation Manager, Personnel Director and Manager of Administrative Services. Angelo grew up in the Chambersburg section of Trenton. He was a loving husband and devoted father. He was married to the love of his life and best friend Elaine Maria Candelori for 58 years. Left to carry on his legacy are his four children and their spouses, son David Candelori and wife Margaret, son Eric Candelori and wife Heather, daughter Aliza Zebrowski and her husband Paul, and son Matthew Candelori and his wife Christina. He is also survived by his sisters Marian Kardos, Elaine DiConstanzo, Karen Jopko; and his many nieces, nephews and cousins. He was especially proud of his grandchildren, Christopher and his wife Kelly, Nicole, Claire, Michael, Sydney, Ann-Katherine, Erica, Valentina, Isabella, Natalie, and his great-grandchildren, Reagan and Cormac. He was predeceased by his beloved grandson Zachary. Angelo and Elaine greatly enjoyed traveling. Together they visited 55 countries on 5 continents, donating books and school supplies for children, as well as medical supplies to clinics serving the needy. He also enjoyed genealogy, researching his family tree, documenting 12 generations from 1716 to the present. He also authored his biography, "As I Remember", capturing vivid memories of his life. He painstakingly documented the migration of his Italian and Polish ancestors from Europe, life growing up in Chambersburg, his military and civic service, politics and especially family. Angelo was Knighted a Cavalieri in the Order of Solidarity by the Government of Italy and designated a "Point of Light" by the Administration of President George H. W. Bush. He was the recipient of the U.S. Secretary of Energy's Community Service Award, the Enrico Fermi Federation Achievement Award, and twice recipient of the Enrico Fermi Federation Certificate of Merit. He also was the recipient of the Marine Corps League Distinguished Service Award. Angelo was also a member of the 4th Congressional District Selection Committee for U.S. Service Academies, President of the Bordentown Military Institute Alumni Association and President and Chairman of the Board of the Enrico Fermi Federation and Marine Corps Reserve Officers Association Chapter. Angelo will be deeply missed by all who knew and loved him. Relatives and friends are kindly invited to attend Angelo's Mass of Christian Burial on Saturday, March 2, 2019 at 10 a.m. at St. Anthony's Roman Catholic Church, 626 S. Olden Ave., Trenton, NJ 08629. Following the mass, Angelo will be laid to rest at Our Lady of Lourdes Cemetery, 400 Woolsey St, Trenton, NJ 08610. The family wishes to thank the many friends and caregivers who provided outstanding and compassionate care to Angelo. In lieu of flowers, the family request for memorial contributions to be made in Angelo's honor to the Marine Corps Scholarship Foundation, 909 N. Washington Street, Suite 400, Alexandria, VA 22314 or Saint Jude's Children's Research Hospital.

Colonel Angelo V. Candelori, 81, of Trenton, passed away peacefully on Thursday, February 21, 2019. He lived a full and rewarding life. Angelo was born on December 6, 1937 in Riverside, New Jersey, and was the son of the late Leocadia (Alice)... View Obituary & Service Information

The family of Angelo V. Candelori created this Life Tributes page to make it easy to share your memories.

Send flowers to the Candelori family.