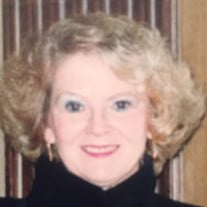 Ann (Nancy) Coleman Helton, 79 of Hamilton, NJ, died at home on Friday, July 13, 2018 surrounded by her loving family. Born in Trenton, New Jersey, Ann married and moved to Michigan to raise her family. Ann worked at Michigan Bell Telephone and retired after 30 years of service and moved back to Trenton in 1995. Ann was an avid reader of novels, she loved to decorate and was a chef of the highest order. Her recipes and serving styles were renowned in the area. Ann appreciated music, plays and the visual arts. She liked to travel and appreciated the many foods and cultures of Europe. Ann loved traveling to spend time with her children and grandchildren in California, Massachusetts and Michigan. Ann would attend every milestone her grandchildren met and usually assisted with the cooking and festivities to make them grand! Ann kept in touch with a strong network of friends and met regularly with the Tuesday Night Ladies and the Golden Hour Club of Groveville. Ann was the wife of the late George A. Helton, daughter of the late Henry and Ann Cannon Coleman, grandmother of the late Nathan Tafelsky, she is survived by a son and daughter-in-law, Michael and Peggy LeMay of CA; 4 daughters and sons- in- law, Kathleen and Kenneth Horka of MA, Judith and Christopher Emery of MI, Mary Jo and Robert Tafelsky of MI, and Linda and Thomas Kelly of NJ; 12 grandchildren, Zachary Tafelsky, Ryan Emery, Matthew Horka, Jillian Horka, Samantha Emery, Jacqueline Emery, Madeline Emery, Henry Kelly, Katherine Kelly, Elizabeth Kelly, Rachael LeMay, Chris Helton and his wife Christine; a brother, Dr. Henry Coleman of The Bahamas, and a sister and brother-in-law, Mary and Charles McClain of NJ; 4 step-children, Susan Quickle, Elizabeth Kincel, Horst and Judith Helton, Albert Helton; also survived by many nieces and nephews. Mass of Christian Burial will be celebrated at St. Raphael's Church 3500 S. Broad St., on Saturday, July 21st at 9:30am. Burial will follow in St. Mary's Cemetery. Calling hours will be held at Murphy Funeral Home 1863 Hamilton Avenue, Hamilton, NJ on Friday, July 20th, from 6-9PM.

The family of Ann Helton created this Life Tributes page to make it easy to share your memories.

Send flowers to the Helton family.