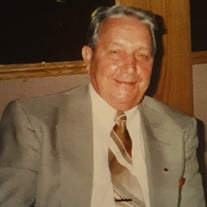 Arthur Stephen Nurko, age 92 of Hamilton, NJ, peacefully passed away on Thursday, August 22, 2019 surrounded by his beloved family. Four generations of family members were with him as he gained his angel wings. He was born in Hightstown, NJ, to the late William and Mary Nurko. He was a graduate of Hightstown High School and Rider University. Arthur proudly served his country in the US Army during WWII, and was a man of faith who was an avid member of Our Lady of Sorrows - St. Anthony Parish. For many years he was a supervisor at DeLaval Turbine. Arthur, enjoyed spending lots of quality time with his family, gardening, the outdoors, Atlantic City, playing cards, horse races, and animals. He was known for his incredible sense of humor, welcoming everyone into his home with open arms, and was famous for his soups, stuffed cabbage, Italian sausage, and homemade mashed potatoes. He enjoyed supporting his grandchildren in sports as well as other main events in their life. He will be deeply missed by all who knew and loved him. He is survived by his wife of thirteen years, Charlotte Cashel Nurko; son, Barry Nurko and his wife Andrea; daughter, Cindi Pivovarnick and her husband Gary; grandchildren, Rob Pivovarnick and his wife Vicki, Erin Kobylarz and her husband Michael; great grandchildren, Gavin Kobylarz, Baylor Kobylarz, and Logan Pivovarnick; brother in law, Joel Tornquist and his wife Evelyn. As well as many loving nieces, nephews and friends. Arthur is preceded in death by his beloved wife and mother to his children of forty eight years, Shirly Tornquist Nurko; siblings, George Nurko and his wife Ann, Paul Nurko and his wife Margaret, Peter Nurko survived by his wife Ann, Mollie Timko and her husband Steve, and Fred Nurko and his wife Pauline; brother in law, Frederick Tornquist and his wife Viola; and sister in law, Betty Lou Koch and her husband Bob. Art's family would like to give a special thanks to Denise, Tony, Tameeka, Nicole , Taquanna and Shantell from Ennoble Care Hospice. They took such great care of Art and made he comfortable at home. In lieu of flowers, memorial contributions may be made to a charity of your choice or the Our Lady of Sorrows - St. Anthony Parish in honor of Arthur Stephen Nurko. Relatives and friends are kindly invited to attend Arthur's visitation on Monday, August 26, 2019 from 5:30pm to 8pm and Tuesday, August 27, 2019 from 9am to 10:30am at the Murphy Funeral Home. Located at 1863 Hamilton Ave, Hamilton, NJ 08619. A Mass of the Christian Burial will follow on Tuesday, August 27, 2019 at 11am, at the Our Lady of Sorrows Church. Located at 3816 East State Street Ext., Hamilton, NJ 08619. Entombment will follow at the Princeton Memorial Park, located at 403 Gordon Rd, Robbinsville Twp, NJ 08619.

Arthur Stephen Nurko, age 92 of Hamilton, NJ, peacefully passed away on Thursday, August 22, 2019 surrounded by his beloved family. Four generations of family members were with him as he gained his angel wings. He was born in Hightstown, NJ,... View Obituary & Service Information

The family of Arthur S. Nurko created this Life Tributes page to make it easy to share your memories.

Send flowers to the Nurko family.