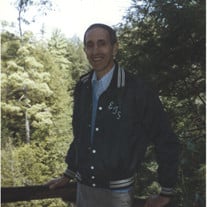 Clarence "Bones" Gilbert, Jr., EWING TOWNSHIP Clarence John Gilbert, Jr., 87, passed away Tuesday, Jan. 28, 2020, at the Atrium in Hamilton surrounded by his loving family. Born on July 28, 1932 he grew up in Trenton, NJ and attended Trenton Catholic Boys High School. He received the nickname "Bones" as a member of the 1949-1950 boys high school basketball team. That year Bones took them to the state championship and won. His teammates had such nicknames as "Fats", "Tex", "Baldy" and the coaches decided that he should have a nickname too. It stuck forever. So much so that people would frequently ask what his first name was. Bones received a full basketball scholarship to Rider College where, as a freshman, was a starting forward on the varsity team. After that first year he entered the US Army for two years where he was sent to Korea during the war. As fate would have it with Bones, he was assigned to the Finance team as opposed to combat which led to his success post service time. After his discharge from the Army Bones spent seven years in Accounting at Trenton Pottery and forty-five years at Educational Testing Services in Systems, Optical Scanning and Management. He was acknowledged worldwide as an expert on Optical Scanning Technology and Equipment along with its processing. He retired from ETS in July 1994. Bones lived in Ewing Township, NJ with his wife Helen, son Donald and daughter Natalie. He always loved playing basketball and softball. He played competitive basketball until the age of forty. That final year he was chosen to the Trenton league All Star first team as a member of the champion Checker Store team. During those many years he played for numerous teams throughout the state winning countless MVP and Sportsmanship awards. He went back to competitive basketball in his golden years where he took home the gold medal in the Senior Olympics at the ripe age of 80. Bones served as a member of the New Jersy IAABO Board 193 of Approved Basketball Officials for over 30 years. He was inducted into the Hall of Fame as both player and referee. Bones' softball career started in the Army in 1953 and extended until 1988. It was fast-pitch until 1960. During those fast pitch years Bones played on the Polish Falcons #59 team of Trenton, NJ which won several open state championships and featured great battles with Burry Biscuit of Elizabeth, NJ. The Falcon team also participated in an Eastern Seaboard league that ran from Baltimore to Providence. Bones earned another nickname during his softball career, they referred to him as "The Legend". He was also a member of the 1959 ASA Class A fast pitch State Champion Palazzo team of Ewing Township, NJ. Fast-pitch turned to slow-pitch in 1961. In those early years of slow-pitch there were only two ASA classifications of slow-pitch; Open and Industrial. For many years Bones was fortunate to be on both the Open (Palazzo's) and Industrial (ETS) State Championship teams. Over the years he had been to more than twenty Regional and World slow-pitch tournaments. As a member of the ETS team Bones was selected as the Regional MVP in 1975 in Utica, NY which was the first year that ASA Industrial Regional competition started. Bones remembers hitting a home run just after it was announced that he was the MVP. Bones was a pitcher for over 30 years. At the age of fifty and again at the age of fifty-five he was selected as the pitcher on the Eastern Regional All Tournament Team. Bones retired from playing softball at the age of fifty-five after the 1988 season. He was strongly pursued to play in over fifty leagues. But, Bones was coaching both of his children across 3 sports and would say that he didn't want to play with those old men. A major highlight of Bones' career occurred in 1968, when, at the annual Trenton banquet for basketball and later that year for softball, he was awarded the Sportsmanship award at both banquets. Bones was an ASA umpire for over 30 years and was inducted into the Hall of Fame as both player and umpire. He was the Umpire-In-Chief for New Jersey ASA District #4 for many years. He was one of the assignors for the Mercer County Softball Umpires Association and assigned between 1200-1500 games annually. He was a member of the Executive Committee and Assistant Treasurer for the group. He had umpired many ASA Travel and State tournament fast-pitch games over the years. In 2006 he was awarded the Mid Atlantic ASA Memorial award in Memory of past ASA Members: George Smith, Dick Archer and Bernie Berman for Outstanding Service, Dedication, Loyalty and Ability. In 2008 the Trenton Catholic Golden Wave Club presented him with the Fr. Armand Sorrento "Tough Guy Award". In 2013 he was presented with an award placing Bones on the Ewing Township Recreation Honor Roll for his contribution to Ewing Adult Softball. Bones also was awarded many MVP and Sportsmanship awards over the past 65 years. He is predeceased by his father, Clarence John Gilbert, Sr., his mother, Julia Farfalla and his stepmother Myrtle Gilbert, all his siblings Joan Gronokowski, Henry Gilbert, Jerome Gilbert and Kathy Hall. He is survived by his wife, Helen Gilbert, his children Donald Gilbert, Natalie Hernandez and Michelle Hoffman, his grandchildren Tara Ziegler, Rachel Hoffman, Xavier Hernandez, Samantha Hernandez, Sean Hernandez, his great-grandchildren Samuel Ziegler and Benjamin Ziegler as well as many nieces and nephews. He was a pillar of the community, but more importantly everything to everyone in his family. The world could use more Clarence John Gilberts. Viewing hours will take place on Saturday February 1st, from 1-4pm at Murphy Funeral Home located at 935 Parkway Ave, Ewing NJ, 08618. There will be a short prayer service concluding the viewing hours and the family would encourage anyone who would like to share a memory they had with Bones to please do so at the conclusion of the service.

The family of Clarence Gilbert created this Life Tributes page to make it easy to share your memories.

Send flowers to the Gilbert family.