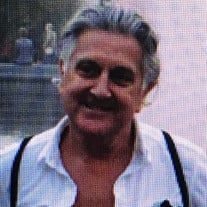 Damien W. (Walter G. III) Scheuerman, 69, of New York passed away at his home in Greenwich Village, New York on January 29, 2018. Born in Philadelphia, PA, Damien grew up, the eldest of ten children, in Yardley, Pennsylvania. He graduated from St. Joseph's Prepratory School in 1966 and Villanova University in 1970. For many years, he worked in the media industry in New York City (for Newsweek International Magazine and ABC Radio). He earned an MBA degree from Seton Hall University in 1984. In 2001 Damien eatablished an antiques store in Madison, N.J. which he eventually moved to New York City. He enrolled in the Masters in Social Work and Psychotherapy Program at New York University in 2007 and received that degree in 2010. Damien was a well regarded Psychotherapist whose work was a lifeline for so many of his patients, especially children and young adults. He was funny, decisive, pragmatic, humble, handsome and kind; an adventurous, fun loving father and grandfather; and a good friend to many. Son of the late Dr. Walter G. Jr. and Rosemary Scheuerman, brother of the late Dr. William, he is survived by a daughter and son-in-law, Kitty and Joby Fowler; a son and daughter-in-law, Christian and Christy Scheuerman; 6 grandchildren: Lilly, Jack and Grady Fowler; Paige, Cooper and Sammy Scheuerman; 8 brothers and sisters, Dr. Thomas, Michael, Christoper and Robert Scheuerman, Patricia Marcanik, Carol Kernan, Nancy and Joanne Scheuerman; and many nieces and nephews. The family will receive friends at Our Lady of Good Counsel Church, 137 W. Upper Ferry Road, W. Trenton, NJ 08628 on Tuesday from 9:30 until 11am. Mass of Christian Burial will be celebrated at 11AM. Burial will follow in St. Mary's Cemetery, Hamilton. Arrangements are under the direction of the Murphy Funeral Home, 935 Parkway Ave., Ewing, NJ 08618. Please visit www.murphyfh.com for additional information. Donations may be made in his name to St. Joseph's Prepratory School (1733 W Girard Ave, Philadelphia, PA 19130).

Damien W. (Walter G. III) Scheuerman, 69, of New York passed away at his home in Greenwich Village, New York on January 29, 2018. Born in Philadelphia, PA, Damien grew up, the eldest of ten children, in Yardley, Pennsylvania. He graduated from... View Obituary & Service Information

The family of Walter Scheuerman created this Life Tributes page to make it easy to share your memories.

Send flowers to the Scheuerman family.