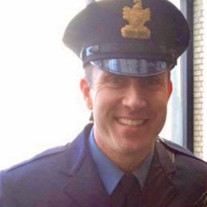 Daniel Anthony Pagnotta III passed away suddenly on Wednesday, July 29th. Born in Trenton, New Jersey, on August 18, 1976, Dan grew up in Trenton and moved to Hamilton. He was a graduate from Hamilton High West and received a Bachelor's Degree in Psychology from St. Andrew's University in Laurinburg, N.C. Dan was an avid soccer player at the high school and collegiate levels. Most recently he participated in local men's indoor leagues, and even traveled to Spain to compete with the NJ Blue Soccer Team in 2013. Dan was a 21 year veteran of the Trenton Police Department, rising to the rank of Sergeant. He was revered and honored for his leadership skills and dedication to protect and serve the City of Trenton. He was a detective within the Proactive Unit and was assigned to the Mercer County Narcotics/Gang Task Force. He also supervised the Violent Crime Offenders Unit and was a Sergeant in charge of the patrol division. As a sworn officer, he also participated in the annual Police Unity Tour, a 250 mile bike ride, which raises funds and brings awareness to those officers who have died in the line of duty. He attended numerous training classes including the FBI SWAT Training and served as a Range Master where he trained other officers. Dan was the recipient of various awards and honorable accolades. In addition to soccer, Dan was an enthusiastic fan of the Chicago Bears and the New York Mets. He was also a season ticket holder for the Philadelphia Union where he regularly attended games with his family. He was a committed and respected coach for his daughter's soccer team, the Hopewell Valley Dust Devils. His active presence on the sidelines was both motivating and influential. Dan was the husband of Mollie Burns Pagnotta of Pennington, and the devoted father of his daughter, Colbie and son, Landon. Dan was the son of Daniel and Teresa Pagnotta of Columbus, and Leslie and Dave Leslie of Burlington; brother to Christine DiPilla and husband Michael of Doylestown, PA, Kelly Pagnotta Pingitor and husband Matthew of Cinnaminson, and Kaitlyn Humble and husband John of Springfield. He is also survived by his mother-in-law Deborah Hardifer and husband Dave, his father-in-law Dennis Burns Sr. and wife Laverne, all of Ewing. In addition, he is survived by sisters-in-law Shaune Pero, Shannon Nelson, and Keely Burns; brothers-in law, Dennis Burns Jr. and wife Tracey, T.C. Nelson and wife Leanna, Kevin Nelson and wife Janice, Casey Burns and wife Tara Lee; aunts and uncles, Joann Pagnotta, the late Donna Sutton and husband Leonard, Teresa Fell and husband Richard, Gregory and wife Nancy Lovenduski, the late David Harvey, James Harvey and wife Nancy; and grandparents, the late Marion and Daniel Pagnotta and Lester and Alice Foster; along with several nieces, nephews, cousins, extended family members, and friends. Affectionately known as Danny by close family members and friends, his infectious smile and laughter paired with his incomparable sense of humor and quick wit captivated any room he entered. He inspired countless lives as a pillar of strength, determination, perseverance and grit. He maintained his role as an inspiring leader for others, as he demonstrated all the qualities of a model of excellence. His passion and zest for life, family, and friends were evident in his persistent efforts to always bring light and laughter to all in his presence. He will always be remembered as an unparalleled prankster, photoshop master, and ball-busting legend! The family will receive friends and loved ones on Wednesday, August 5 from 9:30am to 12:30pm at Our Lady of Good Counsel Church, 137 West Upper Ferry Road, Ewing Twp., NJ 08628. Services will begin at 12:30. You may watch a live stream of the service at this web address: https://webcasts.lifetributes.com/1081912 Please visit www.MurphyFH.com for additional information. In lieu of flowers, memorial contributions may be made in his name and in support of his children to the Trenton PBA Local #11, P.O. Box 33262, Trenton NJ, 08609.

Daniel Anthony Pagnotta III passed away suddenly on Wednesday, July 29th. Born in Trenton, New Jersey, on August 18, 1976, Dan grew up in Trenton and moved to Hamilton. He was a graduate from Hamilton High West and received a Bachelor's Degree... View Obituary & Service Information

The family of Daniel Pagnotta created this Life Tributes page to make it easy to share your memories.

Send flowers to the Pagnotta family.