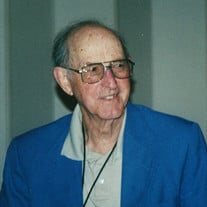 David Edward Carle, 92, of Hamilton entered God's kingdom on Wednesday, April 18, 2018 at CareOne Hamilton. Born in Claverack, NY, he lived in Hamilton. As a graduate of Rider College, David earned a Bachelor's Degree in Business Administration and later, a Masters Degree in Education at Trenton State College. During his career, he worked for Pepsi Cola and went on to be an educator and guidance counselor for the Pemberton Board of Education. He retired in 1988 after a 25 year career. In his college days, he was a brother of the Phi Sigma Nu Fraternity where he participated in the first reenactment of Washington's Crossing of the Delaware which was covered in a 1947 LIFE magazine article. He was a proud Navy Veteran of WWII where he served in the South Pacific. David was a member of the Hamilton Civitans, the Bordentown Elks Lodge 2085, and the Hamilton American Legion. He was an avid bowler and golfer. David was an interesting conversationalist and was well known for his unique sense of humor. Son of the late Wesley Scott and Marjorie Haskins Carle, brother of the late Wesley Scott Carle and Anna Gumaer, he is survived by his wife of 68 years, Helen Flynn Carle; his daughter and son-in-law, Lynnsay and Timothy Megargle of Lawrenceville; his son and daughter-in-law, David Scott and Claudia Carle of Hamilton; 4 grandchildren, Michael and wife, Rebecca Megargle, Allison and husband, Jason DiClemente, David John Carle and fiancee Theresa Novrit, and Caitlin Marissa Carle; 5 great grandchildren, and many nieces and nephews. The family would like to extend their deepest gratitude to the staff of Robert Wood Johnson Hospital Hamilton, CareOne Hamilton, as well as Ascend Hospice. We will never forget your kindness. Relatives and friends are invited to visit on Tuesday, April 24, from 10 to 11 am at the United Presbyterian Church of Yardville, 12 Yardville Hamilton Sq. Rd, Hamilton, NJ 08620. Funeral Services will begin at 11 am. Burial with Navy Honors will follow in Ewing Church Cemetery, Scotch Rd. Ewing. In lieu of flowers, memorial contributions may be made to the United Presbyterian Church of Yardville.

The family of David E. Carle created this Life Tributes page to make it easy to share your memories.

Send flowers to the Carle family.