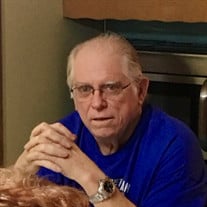 Dennis P. McGowan, of Ewing, passed away suddenly on August 9, 2020 at the age of 73. Born in Trenton, he was a lifelong resident of Ewing Township. He was a loving brother to his twin Kathy McGowan, a loving role model, father figure and "Uncle Den" to his nephew and godson David Shinn, his niece Michelle Kalteux and many of their friends. He is survived by Joan and Paul McCormick, Gene and Gail Errickson and many other cousins and family members. He was a kindhearted, loving and giving friend to everyone who was blessed to be in his presence, especially to some of his closest friends Dave and Ellen Shinn, Maria and John Ialacci, Tommy Armenti, Chris Biache, Ed Ganley, Bill Sakowicz and especially Bill's dog, Jackson. Dennis' joyous energy would light up the room, whenever you were around him and he always made everyone laugh with his dry, quick-witted sense of humor that allowed him to crack a joke out of nowhere. Dennis enjoyed a challenging crossword puzzle and above all else, his greatest passion in life was spending time with the children, especially his Godson David. He is predeceased by his parents Louis and Dolores "Dolly" McGowan and his close friend Grandmaster Jae Chul Shin. He loved all animals, but always kept a special place in his heart for his beloved dog Duchess who he is reunited with in heaven. Dennis retired as a lieutenant after a 25+ year career with Mercer County Corrections. Prior to this, he served his country proudly in the US Army as a sergeant radio teletype operator stationed in Germany with the 511th military intelligence company and was awarded the good conduct medal, national defense service medal and expert M-14 marksmanship badge. Dennis was a proud US Army veteran and patriot with a great love for his country, he was especially fond of President Donald J. Trump and his "Make America Great Again" campaign. Before joining the Army, Dennis received an Associate of Arts Degree from Trenton Junior College. After his time in the military, Dennis attended Temple University School of Pharmacology. He spent many afternoons with friends at Fred and Pete's Deli and years of dedicated practice at Shin Karate competing and placing in many tournaments and the World Championships, achieving the rank of 1st degree black belt. He enjoyed practicing his marksmanship as a member of the Falls Township rifle and pistol association and at various shooting ranges. Dennis had a passion for riding Harley Davidson motorcycles, boating, hunting and fishing. He was also a lifetime member of the Cook Athletic Assoc., PBA and FOP. Dennis loved spending endless hours with his nephew David, as well as, many of his family and friends that he loved so dearly. Visitation will be Wednesday, August 19, 2020 from 9:00am - 10:30am at the Murphy Funeral Home, 935 Parkway Ave., Ewing, NJ 08618 A Mass of Christian Burial will follow at 11:00am at St. Anthony Church, 626 South Olden Avenue, Hamilton, NJ 08629. A graveside funeral service with military honors will follow at St. Mary Cemetery, Hamilton, NJ. In lieu of flowers, donations can be made in Dennis' memory to St. Jude Children's Hospital at www.stjude.org or your favorite animal rescue. www.murphyfh.com

Dennis P. McGowan, of Ewing, passed away suddenly on August 9, 2020 at the age of 73. Born in Trenton, he was a lifelong resident of Ewing Township. He was a loving brother to his twin Kathy McGowan, a loving role model, father figure and... View Obituary & Service Information

The family of Dennis McGowan created this Life Tributes page to make it easy to share your memories.

Dennis P. McGowan, of Ewing, passed away suddenly on August 9,...

Send flowers to the McGowan family.