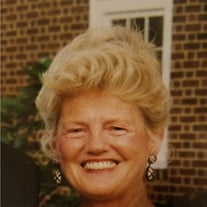 Diane Clare Phoenix Duffy, 79, devoted wife, mother, daughter and friend, passed away peacefully at home on December 5th surrounded by her loving children after a valiant and grace-filled battle with cancer. She was happily married to Jim Duffy for fifty years until his passing in 2012. Daughter of the late Adrian and Gertrude Phoenix, and mother of the late Ellen Marie Duffy, Diane is survived by four children, Lynn Duffy Maloney of Kensington, Maryland and her husband Christopher; James Duffy, Jr. of Princeton and his wife Leslie Angel Duffy; Michael Duffy of Pennington and his wife Kaitlin Small Duffy; and Kathryn Duffy Bavuso of Rumson, NJ and her husband Daniel; nine grandchildren, Kathryn, Margaret and Abigail Maloney; James G. (Jamie) Duffy, III; Elizabeth (Ellie) and Wilson Duffy; and Matthew, Thomas and Jane Bavuso. Diane was a talented and contented homemaker who was as comfortable in a canoe as she was in a ball gown. A nature-lover at heart, she was well-known for her lovely gardens and great enjoyment of birds. Diane was a woman of genuine faith who had a bountiful network of treasured friends. Her children and grandchildren were her greatest pride and joy, followed closely by her home on West Long Drive in Lawrenceville. Originally from Southbridge, Massachusetts, a small New England town that remained an important presence in her life, Diane graduated from Georgetown University in 1960 where she met her husband Jim at a pep rally on his 19th birthday. After a brief career in nursing in Massachusetts, she moved to Lawrenceville where she and Jim resided and raised their family for fifty years. The last several years of her life included extended stays at the home she and Jim owned in Fort Myers, Florida. During her time in New Jersey, Diane was a member of the Junior League, the Lawrenceville Women's Club, the Trenton Country Club, and a faithful parishioner at St. Ann's Church in Lawrenceville. She was an enthusiastic member of the Stuart Country Day School and Lawrenceville School communities where her children attended school. Mass of Christian Burial will be celebrated on Wednesday, December 20th at 11am at St. James Roman Catholic Church, 115 E. Delaware Avenue in Pennington, New Jersey. The family will receive friends on December 19th from 5-7pm at M. William Murphy Funeral Home, 935 Parkway Avenue in Ewing, NJ and at the church on Wednesday from 10-11am. Interment will be private. Those who wish to honor and remember Diane are encouraged to lovingly tend to their garden and feed the birds. In addition, in lieu of flowers, we invite you to honor Diane's memory by supporting Georgetown University where her family is naming a space to recognize the important place that Georgetown played in Diane and Jim's life. You can make a gift online here ( https://giving.georgetown.edu/ ) and note that it is in memory of Jim and Diane Duffy. In addition, donations may be made to Riverview Cancer Center, 1 Riverview Plaza, Red Bank, NJ 07701, which provided Diane with excellent care during her illness.

Diane Clare Phoenix Duffy, 79, devoted wife, mother, daughter and friend, passed away peacefully at home on December 5th surrounded by her loving children after a valiant and grace-filled battle with cancer. She was happily married to Jim Duffy... View Obituary & Service Information

The family of Diane Duffy created this Life Tributes page to make it easy to share your memories.

Send flowers to the Duffy family.