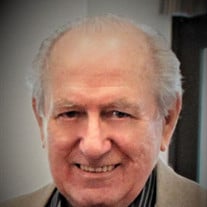 Donald J. Brodowski, 83, of Hamilton Twp., NJ passed away peacefully on Thursday, August 3, 2017 at Hamilton Continuing Care Center in Hamilton. Donald was a United States Army Veteran who served during the Korean War, a graduate of Trenton Catholic and Trenton Junior College where he held several editor positions and was credited for the creation of the still current Viking mascot (MCCC). Son of the late Leon and Frances Brodowski, brother of the late Norbert, Bernadette, Gertude and Carl, he is survived by his loving wife of 58 years, Shirley (Clarici); his son and daughter-in-law, David and Constance Brodowski of Voorhees; daughter and son-in-law, Judith and Philip Alu of Hamilton; 3 grandchildren, Katharine Brodowski, Danielle and Jacob Alu; his sister, Elaine Bertino, and loving nieces and nephews. The family will receive friends on Wednesday, August 9th at St. Gregory the Great Church, Hamilton from 9-10:15 am. Mass of Christian Burial will be celebrated at 10:30 am followed by burial with military honors at Washington Crossing Veterans Cemetery, Washington Crossing PA. In lieu of flowers, memorial contributions may be made to the National Parkinson Foundation www.parkinson.org and St. Jude Children's Hospital www.stjude.org Arrangements are under the direction of the M. William Murphy Funeral Home, 1863 Hamilton Ave., Hamilton.

The family of Donald Brodowski created this Life Tributes page to make it easy to share your memories.

Send flowers to the Brodowski family.