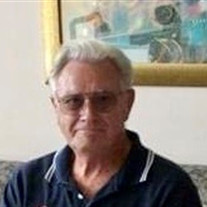 Donald P. Geoghan, 94, of Trenton, passed away Wednesday, September 16, 2020 at the Greenwood House Nursing Home. Donald Phillip Geoghan grew up in the Robbinsville area when it was largely farmland. He worked on several farms as a teenager, and he spent a lot of time fishing and hunting. He was an avid outdoorsman. Donald was also an excellent baseball player. During World War II, Donald enlisted in the Marines at age 17 and completed his training at Parris Island in South Carolina. He was assigned to the Pacific Theater as a communications specialist and expert rifleman. He took part in the battles of Guadalcanal, Bougainville, Mindanao, Zamboanga, Leyte Gulf and the Solomon Islands. Donald met and married the love of his life, Connie in 1948. They would have been married 72 years in May 2020. Donald and Connie were true soul mates. On September 16, 2011, Connie passed away, and Donald passed on September 16, 2020, the same day nine years apart. They adopted three children; Ilene, Donald and Greg. Donald worked as a United States letter carrier for over 30 years, retiring in 1984. Donald and his wife traveled extensively. They traveled throughout Europe, England, Scotland and Ireland, Iceland, and the United States. Donald and Connie once found themselves on a cruise ship in the middle of a typhoon in Tahiti! They took over 30 cruises in their lifetime. Donald was an expert gardener, an amateur electrician, carpenter, plumber, lawnmower repair guy…..he could do it all! He loved music, especially Big Band and country. Before his stroke in 2016, he did 200 sit-ups every day and walked at least a mile. He also meditated frequently. He was a huge fan of the Philadelphia Eagles, Phillies, and Flyers and could recite stats and the teams' information from years ago. Donald is preceded in death by his wife Connie Stanziale Geoghan, his father Hugh Geoghan, his mother Louella Exner Geoghan, his brother Robert "Coke" Geoghan, his sister Dorothy Geoghan Carr, a son Donald Hugh Geoghan, and a grandson Donald Hugh Geoghan, Jr. He is survived by his daughter Ilene Geoghan Black and her husband George of Ewing, NJ, his son Gregory Geoghan of Englewood, Florida, grandchildren George John Black III of Yardley, PA, Donald Phillip Black and his wife Michelle Ashbock Black of Fairless Hills, PA, Colleen Marie Geoghan Juhl and her husband Raymond of Brighton, Colorado, Kristin Diane Geoghan Lawrence and her husband Joseph of Yardley, PA, Christopher Geoghan and his girlfriend Souvenir Ros of Philadelphia, PA, John DeSantis, Barbara DeSantis of Brighton, Colorado, and Jennifer DeSantis of Philadelphia, PA. Donald has five great-grandchildren: Evan and Kyle Lawrence, Madison and Corban Juhl, and Myles Geoghan. His two granddogs Peaches and Jax Black will miss their Pop. Donald is also survived by several beloved nieces, nephews, grandnieces, and grandnephews. He is also survived by many cousins by marriage. He will be missed by his longtime neighbor and dear family friend Blanche Farber. His Greenwood House "family" will forever be considered heroes and angels, not just by Donald but by his family. We welcome family and friends for visitation from 10-11AM on Tuesday, September 22 at the Murphy Funeral Home, 935 Parkway Avenue, Ewing, NJ 08618. A funeral service will take place at 11AM. We ask that visitors please wear masks and refrain from physical contact with the family. Social distancing will be observed in the funeral home. Donations in Donald's name may be made to Greenwood House, 53 Walter Street, Ewing, NJ 08628.

Donald P. Geoghan, 94, of Trenton, passed away Wednesday, September 16, 2020 at the Greenwood House Nursing Home. Donald Phillip Geoghan grew up in the Robbinsville area when it was largely farmland. He worked on several farms as a teenager,... View Obituary & Service Information

The family of Donald P. Geoghan created this Life Tributes page to make it easy to share your memories.

Send flowers to the Geoghan family.