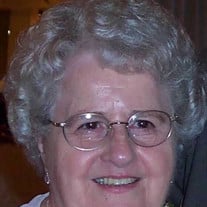 Dorothy "Dottie" Marie Sackett (Rodier) August 23, 1923 - February 20, 2019 At the age of 95, loving mother to seven children - Jane Coult (Charles Muller), Jack Sackett, Kathy Caola (John Caola, deceased), Gail McElroy (Edward McElroy), Charles Sackett, Stephen Sackett, Sr. (Judy Zobele), and Mary Beth Novak - Dottie was called home by God. Her father Oswald O. Rodier, mother Clara Belle Bosselait, and sister Rita English greeted Dottie on her journey home. She is survived and will be dearly missed by her beloved sister, Connie Stavenger (Vern Stavenger, deceased), and brother, Paul Rodier (Sara Rodier). Many nieces and nephews will remember her fondly. All who met Dottie were soon aware that she was a beloved Mémère to 13 grandchildren and a still dancing Grand Mémère to an ever-growing number of great and great-great grandchildren. After raising her children Dottie returned to work. First, for the Ewing School system then for the State of New Jersey - Division of Taxation as a principle clerk. After 16 years of service she retired. Dottie was an accomplished artist. A talent she cultivated later in life after she retired. Her legacy lives on in the numerous paintings and sketches she has left behind for her families' enjoyment for many generations to come. A special thank you to Ventura and other care givers for your loving kindness and care of Dottie. The family will receive relatives and friends for visitation on Sunday, February 24, 2019, from 3 to 6pm, at M. William Murphy Funeral Home in Ewing, New Jersey. A Mass of Christian Burial will be offered at Incarnation Catholic Church in Ewing, New Jersey on Monday, February 25, 2019, at 10:30 am; and internment will immediately follow at St. Mary's Mausoleum in Hamilton, New Jersey. The family asks that memorial contributions be sent to the National Stroke Association.

The family of Dorothy M Sackett created this Life Tributes page to make it easy to share your memories.

Send flowers to the Sackett family.