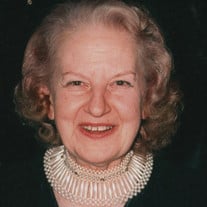 Ewing - Ernestina "Tina" Steele, 95, passed away June 13, 2018. She was born in Sevierville, Tennessee , the daughter of Ola Ernest and Elizabeth Fox McMahan. The youngest of 5, she was raised on the family farm and began piano lessons at 13. At 16, she won a piano contest and then earned her B.A. in music from the University of Tennessee where she met and married operatic tenor Byron Steele. Tina was an outstanding accompanist and vocal coach for over half a century. She played in New York's Carnegie Hall, Town Hall and City Center. She and her husband enjoyed a successful nightclub career appearing in clubs, hotels and resorts all over the East coast. After years of touring, they settled in the Trenton area where Byron accepted a position as Associate Professor of Music at Trenton State College. Together they founded Artists Showcase Theatre and The Trenton Civic Opera Co. giving innumerable opportunities to many aspiring singers. As accompanist and coach, Tina is beloved by her many students whom she loved and cared for as the children she never had. She was an indefatigable worker, doing everything from moving sets, making costumes, maintaining the theatre, baking and selling her famous brownies and caring for Byron's Arabian horses. She was preceded in death by her parents, Ola Ernest and Elizabeth Fox McMahan, husband Byron, brothers and sisters-in-law, Wilbur and Lucille McMahan, Glenn and Florita McMahan, sisters, Dorothy McMahan and Elizabeth Adamitis. Tina is survived by many nieces, nephews, cousins and a multitude of loving friends. Calling hours are Wednesday from 9-11am followed by a service at the Murphy Funeral Home, 935 Parkway Ave. Ewing, N.J. Interment will be in Steele, MO. Please visit www.murphyfh.com for additional information. Memorial contributions may be made in her name to SCHS Foundation, P.O. Box 4124, Sevierville, TN 37864, Music and Choral Scholarships.

Ewing - Ernestina "Tina" Steele, 95, passed away June 13, 2018. She was born in Sevierville, Tennessee , the daughter of Ola Ernest and Elizabeth Fox McMahan. The youngest of 5, she was raised on the family farm and began piano lessons at 13.... View Obituary & Service Information

The family of Ernestine M. Steele created this Life Tributes page to make it easy to share your memories.

Send flowers to the Steele family.