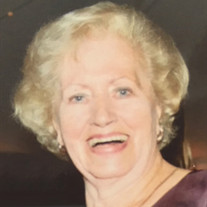 Eva Katalin (Bruckner) Ungrady, of Trenton, N.J. and Budapest, Hungary, died peacefully with family by her side on March 20, 2018, at the age of 94. Eva was born on September 27, 1923, in Budapest, Hungary, where she lived until her early twenties. She was the daughter of the late Dr. Aladar and Mrs. Katalin (Baranyi) Bruckner and the sister of the late Judith Bogdandy and Kathleen Ihasz. Eva witnessed the destruction of her country and experienced the disruption of her family during the German and Soviet occupations of Hungary, sometimes living in basements for days, struggling to find food and clean water. She courageously escaped across the Iron Curtain in southwestern Hungary until finding refuge in Austria. For two and a half years, Eva worked as a nurse in the hospital at an Austrian refugee camp, where she also wrote and published a Hungarian newspaper, while awaiting safe passage to the United States. After nearly two weeks at sea, in November 1950, Eva and her parents arrived in New York aboard the USS General R. M. Blatchford. Though she witnessed the atrocities of war, Eva would tell her family her story is one of survival and call herself "one of the lucky ones" who was able to rebuild a joyful, fulfilling life in the United States, a country she truly loved. Eva settled in Trenton after spending some time in New York City and New Brunswick. Before marrying, she wrote for a Hungarian newspaper and was a broadcaster for radio station WTNJ. On Valentine's Day 1953, she wed Dr. Emery J. Ungrady, a dentist and Trenton native. They lived in Trenton and Ewing, where they raised six children. Eva was a lover of the arts. She was an accomplished artist whose work appeared in Trenton area galleries, and was also a volunteer for the Trenton Artists Workshop Association. Eva never missed a televised tennis match or Triple Crown race, always rooting for the gray horse. She was a lifetime member of the Trenton Country Club. A multilingual avid reader with a love of history, she often shared fond memories of her life in Hungary before the war and of her adventures traveling the world, from Japan to Spain to her beloved journey by train across the United States. Eva dedicated the twilight of her life to her family. She was a doting and beloved grandmother whose thick Hungarian accent and Sunday phone calls forever will be cherished. Eva is predeceased by her husband, Dr. Emery J Ungrady, her parents, her two sisters, and her daughter-in-law, Joan Ungrady. Eva is survived by six children: Judy Pitman and her husband Tom, Emery J. Ungrady, Jr., Dr. Tom Ungrady, Evie Carella and her husband James, Dave Ungrady and his wife Sharon, Paul Ungrady and his wife Ryan; 11 grandchildren: Chaya, Risa, Kevin, Kristin, Sierra, Annie, Keara, Molly, Morgan, Graham, and Cayden; five great-grandchildren: Ryan, James, Isla, Laila, and Theo; a niece, Agnes Knowles, of Cape Cod, Mass., and a nephew, Dennis Vallo, of Naples, Fla. The family will receive friends on Monday, April 2, 2018 from 10am until 11am at Our Lady of Good Counsel Church, 137 W. Upper Ferry Road, W. Trenton, NJ 08628. Mass of Christian Burial will be celebrated in the church at 11am. Burial will follow in Ewing Church Cemetery. Arrangements are under the direction of the Murphy Funeral Home, 935 Parkway Ave., Ewing, NJ 08618. Please visit www.murphyfh.com for additional information. In lieu of flowers, memorial contributions in her name may be made to the Trenton Museum Society, P. O. Box 1034, Trenton, New Jersey 08606

Eva Katalin (Bruckner) Ungrady, of Trenton, N.J. and Budapest, Hungary, died peacefully with family by her side on March 20, 2018, at the age of 94. Eva was born on September 27, 1923, in Budapest, Hungary, where she lived until her early twenties.... View Obituary & Service Information

The family of Eva Ungrady created this Life Tributes page to make it easy to share your memories.

Send flowers to the Ungrady family.