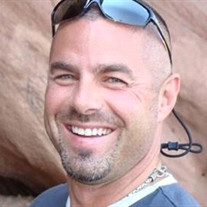 Frederick Scott Schrenk, 48 years old, passed away peacefully surrounded by his parents and family at Chandler Hall Hospice, Newtown, Pa. on July 19, 2019, due to complications from pneumonia. Born in Trenton July 25, 1970, he is pre-deceased by his daughter, Danielle Nicole, his grandparents, Rose and Joseph Walsh and Rita and Theodore Schrenk. Scott is survived by his loving parents Joanne Burns of Manasquan, NJ and Frederick Schrenk of Ewing, NJ, and several aunts, uncles, and cousins. He also leaves behind his faithful golden retriever, Gordy. After attending Hopewell High School and Mercer County Community College, Scott joined the United States Marine Corps in 1995. He attained the rank of Sergeant and supervised a twelve-man maintenance crew responsible for the upkeep and safety of a fleet of multi-million dollar military aircraft. He was a recipient of numerous awards for his outstanding work ethic, courage and leadership including the Navy Achievement Medal. Scott proudly served his Country participating in two tours of duty in the Persian Gulf and was honorably discharged in 1999. Upon his return home from the military, Scott was employed by the Nassau Inn, Princeton, NJ, from 1999 to 2010 where he held several managerial positions including Director of Human Resources. After leaving the Nassau Inn, Scott joined his USMC friend Matt's construction company in Springfield, MA, as a Program Manager. In the summer of 2012, Scott became the owner-operator of a SeaTow franchise based in Manasquan, NJ. He quickly adapted to his new responsibilities as Captain, mastering ocean and bay waters, rescuing boaters and performing many salvage operations especially following Superstorm Sandy. Those fortunate enough to know Scott knew he was a devoted dad, a very compassionate and caring person, a leader, and hard worker. He was an incredibly good friend and loved to ride his Harleys. Scott enjoyed fishing and cooking on the grill and was an avid Eagles fan. He especially loved traveling around the country with close friends to attend the Allman Brothers concerts. Special thanks to Scott's Aunts and Uncles, Sheila Scheibner, Barry Schrenk and Rosemary and Brad Pasko, and family friend, Dini Cabansag, for their unwavering love and support during the last four and a half years and to the nursing staff at both the Capital Health Hospital-Hopewell (Cardiac Unit) and Chandler Hall Hospice for helping Scott with his convalescence during his final days. Family and friends may pay their respects from 6:00pm to 9:00pm on Monday evening, July 29th and from 8:30am to 9:30am on Tuesday morning, July 30th at the M. William Murphy Funeral Home, 935 Parkway Avenue, Ewing, NJ 08618 (www.murphyfh.com) A Mass of Christian Burial will be held on Tuesday, July 30th at 10am at Our Lady of Good Counsel Roman Catholic Church, 137 W. Upper Ferry Road, West Trenton. Interment will follow with military honors at the Washington Crossing National Cemetery, 830 Highland Road, Newtown, PA. 18940. In lieu of flowers, memorial contributions can be made to the American Heart Association, PO Box 78851, Phoenix, AZ 85062 (www.heart.org) or a charity of choice.

Frederick Scott Schrenk, 48 years old, passed away peacefully surrounded by his parents and family at Chandler Hall Hospice, Newtown, Pa. on July 19, 2019, due to complications from pneumonia. Born in Trenton July 25, 1970, he is pre-deceased... View Obituary & Service Information

The family of F. Scott Schrenk created this Life Tributes page to make it easy to share your memories.

Send flowers to the Schrenk family.