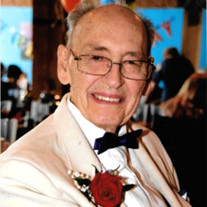 Francis "Frank" McGraw, 94, resident of Lawrenceville and Ewing, passed away peacefully at Greenwood House, Sunday, May 23, 2021. Francis was born in Nanticoke, PA April 18,1927. He served in the US Navy during WWII, stationed in Guam. After his military service Francis worked for the US Government in Washington DC and Philadelphia. Francis and his late wife, Dorothy McGraw, moved to Ewing NJ in 1953. Francis retired from US Steel after 33 years. And then from the State of New Jersey Department of Treasury after 25 years at the age of 80. Francis was an active member of the Ewing Knights of Columbus Council #3756, where he served many positions including Grand Knight. He participated in many of the Council's activities. The Annual Fourth of July Parade, Francis was the one at the front holding the American Flag. Annually he organized the Special Olympics, God's Special Children who have intellectual disabilities. Francis also attended the Annual March for Life in Washington, DC. Francis was highly active in Our Lady of Good Counsel Roman Catholic Church as a lecture for many years. Francis was also a past member of American Legion Post #93 and the Holy Name Bowling league. As a member of the Widows and Widowers of Burlington County and the Yardley Singles, Francis was always ready for the next outing of the many trips they went on and monthly Pizza Night with the group. Even as a resident of Greenwood House, for as long as he was able, his children would take him to meet up with his friends. Anyone who knew Francis, knew he LOVED to dance! He loved to hear his son David play drums with the Midnight Sun Orchestra "Big Band" every chance he had. The 1st Sunday of every month at the Havana in New Hope was the highlight of each month for years. Francis spent his final years as a resident of Greenwood House Senior Healthcare where he received extraordinary care and compassion from his primary CNA Edelyne Nabosse and many staff members. Some called him the 'Mayor of Greenwood House'. He always told 'Jokes with Frank' on Tuesdays and participated in all the talent shows. He loved to make the staff laugh. Francis is predeceased by his parents John and Elizabeth McGrath, loving wife Dorothy McGraw, sisters: Eleanor McGrath, Rita Danielowicz, Rose McGrath, Mary Swanberry, Sadie McGrath, brothers: John McGrath and Harold McGraw. He is survived by his son David McGraw and wife Gay, daughters: Theresa "Terri" Cleveland and husband Joe, and Erin Rodgers and husband Ed; grandchildren Samantha Cler and husband Sam, Christopher Rodgers and his wife Saugin Ma. James McGraw Capt. USAF and Colin Rodgers and his longtime companion Judy Newman. Family and friends are invited to attend the visitation for Frank at Our Lady of Good Counsel RC Church, 137 Upper Ferry Road, West Trenton on Thursday May 27 from 3 to 7 PM. and on Friday from 9 to 10AM. His funeral Mass will be celebrated at 10AM. Live stream of the Mass will begin at 9:30 AM and can be accessed at www.olgcc.net by clicking on one of the live stream links on the right of the page. Interment with Military Honors will follow at the Ewing Cemetery 78 Scotch Rd., Ewing. The children have requested that memorial donations in his memory be made to Ewing Knights of Columbus Council #3756 Charities - P.O. Box 7647 - Ewing, NJ 08628. Our Lady of Good Counsel Church, 137 West Upper Ferry Road, West Trenton, NJ 08628 - Rev. Ariel Robles, Pastor - 609-882-4375

Francis "Frank" McGraw, 94, resident of Lawrenceville and Ewing, passed away peacefully at Greenwood House, Sunday, May 23, 2021. Francis was born in Nanticoke, PA April 18,1927. He served in the US Navy during WWII, stationed in Guam. After... View Obituary & Service Information

The family of Francis P. "Frank" McGraw created this Life Tributes page to make it easy to share your memories.

Send flowers to the McGraw family.