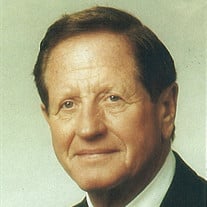 George (Ted) Claffey, 87, of Ewing passed away on November 10, 2018. He was born in Trenton on June 15, 1931, and has been a lifelong area resident. Mr. Claffey owned and operated the Giblon and Claffey Insurance Agency until retiring in 1995. He was a graduate of St. Joseph's Prep School and Villanova University with a BS in Economics. In 1952, he signed a contract to play professional football with the Pittsburgh Steelers. In 1969, he was appointed by Governor Hughes to serve on the Sports Study Commission who was responsible for the NY Giants coming to New Jersey. Mr. Claffey was a trustee of the Hun School for 14 years and Mt. Vernon College for 4 years. He was the first lay person appointed to the Legal District Ethics Committee and served in that capacity for 5 years. He also served on 6 insurance councils and was chairman of the Aetna Council for 5 years. A past president of the Trenton Country Club of which he was a member of for many years, as well as Baltusrol Golf Club, Nassau Club, Bay Head Yacht Club and the St. Andrews Club in Florida. Son of the late George and Mae Claffey, and also predeceased by his sister Mary Claffey. He is survived by his wife of 62 years, Evelyn; four children, George E. Claffey III, Joseph Claffey, Mary Ellen Mc Laughlin and Harley Carpenter; seven grandchildren, Annie Claffey Sofsky , Jack and Hughie Mc Laughlin, Teddy and Macy Carpenter, J. P. and Riley Claffey; and great grandchild, Metta Mary Sofsky. Mass will be celebrated Thursday 11AM at Our Lady of Good Counsel Church, 137 West Upper Ferry Rd., W. Trenton. Burial will follow in St. Mary's Cemetery. In lieu of flowers, memorial contributions and donations may be made to Friends of Joseph T. Claffey Foundation c/o, Children's Hospital of Philadelphia, Lock box 1352, P.O. Box 8500, Philadelphia, PA 19178-1352 Condolences and memories for the family may be left at www.murphyfh.com

George (Ted) Claffey, 87, of Ewing passed away on November 10, 2018. He was born in Trenton on June 15, 1931, and has been a lifelong area resident. Mr. Claffey owned and operated the Giblon and Claffey Insurance Agency until retiring in... View Obituary & Service Information

The family of George "Ted" Claffey created this Life Tributes page to make it easy to share your memories.

Send flowers to the Claffey family.