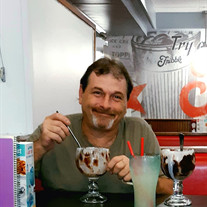 Glenn R. Heller Jr., age 51 peacefully passed away on December 21, 2018 with his loving wife by his side. Glenn was the son of the late Glenn R. Heller Sr. and Genevieve "Jean" Pellegrino. The only maternal grandson of the late Eugene and Pheobe Pellegrino. Glenn was born in Hamilton Twp NJ. But, was an adult life long resident of Mt.Holly-Maple Shade, NJ. Glenn was a graduate of Hamilton High School West, Hamilton Twp. NJ., and Lincoln Technical Institute Pennsauken, NJ. Glenn filled several roles in his life. In addition to him being a loving, loyal husband, doting father, dedicated brother. He was an avid NHL Hockey Fan of the Montreal Canadians. He was also an avid Classic Rock, Hard Rock, Metal, and Alternative Rock music fan. As well as a habituaé of comedy. Above all else, Glenn enjoyed spending quality time with his family. He enjoyed watching movies, listening to music, food, restaurants, and Rock concerts. Glenn spent most of his leisure time enjoying, walks and dining with his wife Robin, time with his son Kenny and phone conversations with his sister Diane. Glenn was a lifetime Commercial HVAC/R service technician. Glenn worked for AMS Mechanical in Cinniminson, NJ for seventeen years, before working as Chief Building Engineer for Diversified Management/Shelbourne in New Castle, Delaware. Glenn will be deeply missed by all who knew and loved him. Left to carry on his legacy is his beloved wife of over 35 years, Robin Anne Heller; his sons, Kenneth James Heller I, and Mathew John Williams-Heller both of South Jersey. A sister, Diane Heller-Vaccaro, a treasured niece Autumn Lynn Eget-Ferrara, Sister and Brother-in-law Stacey and Thomas Cook all of Hamilton Twp NJ and Aunts, uncles and cousins. Also, many friends including; Carlos and Megan Leija, of Newark, DE; long time friends Brian Brickner of Maple Shade NJ, Celeste Inman of Hamilton Twp., and Close friend Russ Forstenhauer of Pine Hill NJ. Also, a furry feline companion Gir. Relatives and friends are invited to attend Glenn's Memorial Gathering on Saturday, December 29, 2018 from 1pm to 2pm with a Funeral Ceremony to follow at 2pm. At the Murphy Funeral Home and Cremation Service, located at 1863 Hamilton Ave in Hamilton, NJ 08619.

The family of Glenn R Heller Jr. created this Life Tributes page to make it easy to share your memories.

Send flowers to the Heller family.