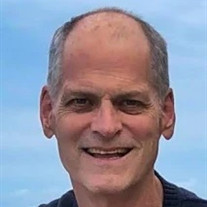 BAY HEAD, N.J. - Henry Welling Lane died at his home here December 12. He was 65 and had battled pancreatic cancer for 27 months. The fifth of seven children of Arthur Stephen and Sally Kuser Lane, he grew up in Harbourton, N.J. He was a fiercely... View Obituary & Service Information

The family of Henry Welling Lane created this Life Tributes page to make it easy to share your memories.

Send flowers to the Lane family.