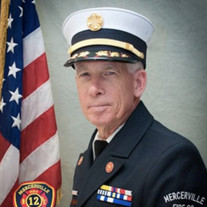 Chief Henry W. Ryan Jr, son of Henry Ryan Sr. and Mary Woods, of Bordentown, passed away peacefully on March 5, 2021 at the age of 71. Henry was a leader of the Mercerville Fire Company for over fifty years, both on the fire ground and administratively. He held all fire line officer positions up to Chief, Chairman of the Board of Fire Commissioners, President of the Relief Association and President of the Fire Company. Henry was the last volunteer Chief to serve Mercerville. His loyalty to the community and dedication to their safety was unsurpassed. In addition to his commitment to the fire service, he will always be remembered for his great sense of humor and his compassion towards those he served. "Hank" was beloved by his peers and admired by the generations of volunteers he mentored to serve Mercerville. In addition to his service to Mercerville, Henry was a supervising auditor for the New Jersey Division of Taxation retiring in 2014 and a former member of Our Lady of Sorrows, where he served as a trustee and as a teacher for baptism classes. He served our country honorably as a member of the Army National Guard of New Jersey. . Henry is survived by his wife Theresa, son Jason and daughter in law Kimberly, as well as his five grandchildren Tyler, Kayla, Shayna, Julian and Collin. Visitation services will be held in accordance with COVID guidelines, therefore limiting individuals within the facilities. We require all to wear a mask in the funeral home and ask those attending to please be considerate of the family and others wishing to pay respects. Visitation will be on Wednesday March 10, 2021 at the Murphy Funeral Home, 1863 Hamilton Ave, Hamilton, NJ from 4:00 to 8:00 PM. Funeral from the funeral home on Thursday March 11 at 10:00 AM followed by the funeral Mass at St. David the King RC Catholic Church, 1 New Village Road, Princeton Junction New Jersey, at Noon. Interment will follow at St. Mary's Cemetery, 1200 Cedar Lane, Hamilton. For those wishing to attend Mass but are unable due to COVID guidlines the Funeral Mass for Chief Ryan will be live streamed on the church's web site www,stdavidtheking.com. Once on the site click on the LIVE STREAMING box on the top of the column on the left side of the page. Henry's family has requested that memorial donations in his memory be made to the St. David the King RC Church, 1 New Village Road, Princeton Junction New Jersey 08850.

Chief Henry W. Ryan Jr, son of Henry Ryan Sr. and Mary Woods, of Bordentown, passed away peacefully on March 5, 2021 at the age of 71. Henry was a leader of the Mercerville Fire Company for over fifty years, both on the fire ground and administratively.... View Obituary & Service Information

The family of Henry W. Ryan, Jr. created this Life Tributes page to make it easy to share your memories.

Send flowers to the Ryan family.