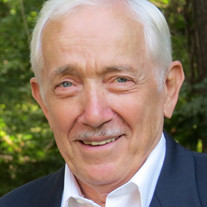 James C. Peoples, 85, of Ewing died suddenly on Sunday at his home. Born in 1935 in Trenton, he was a life-long Mercer County resident. He graduated from Hamilton High School West '53. James began his career in carpentry at age 16 by completing an addition on his family home on Beal Street in Hamilton. After high school James worked as an apprentice carpenter in Trenton where he was smitten with the one and only Judith Bannister. James was drafted into the US Army in 1958 and served for 2 years with the 823rd Artillery Battalion and deployed to protect Formosa (now Taiwan). During his deployment he and Judith continued their relationship through letters. Upon his return their relationship continued to blossom, and they were married on June 17, 1961. With the birth of their first child in the spring of 1962, James completed construction of his family's new home in Hamilton. Four more children would follow. Throughout his life he worked for several contractors, and ultimately retired from the carpenter's shop at Princeton University. An early member of the Jersey Valley model railroad club, James was instrumental in the relocation of the organization to the basement of the Kuser Farm Mansion Museum in Hamilton. During his retirement he continued to pursue his passion for model trains by constructing a garden railroad in his backyard which he enjoyed sharing with his grandchildren and others. He enjoyed researching local history and James and Judith were proud to live in a historic home in Ewing Twp. He was an active member of the Ewing Twp. Historic Preservation Society. Son of the late Urban and Mildred Peoples of Hamilton, brother of the late Paul Peoples, brother-in-law of the late Richard Cincilla, he is survived by his brothers Louis (Janice) and Donald (Mary), sister Dolores Vannozzi (Larry), and sister-inlaw Agnes Peoples; his adoring children, James E. Peoples (Lynnette), David L. Peoples, Elizabeth P. Czelusniak (Steven), John Alexander Peoples (Kristi), and Rebecca P. Lynn (Steven); grandchildren, M. Benjamin, Ashley, William, Nathan, and Charles Peoples; Aaron, Sean and Sydney Lynn; and Olivia and Emily Czelusniak; his sister-in-law, Barbara Cincilla and family; Barry and Larissa Thompson; and many nieces and nephews. The family will receive visitors Thursday from 9:30-10:30 am at the Murphy Funeral Home, 935 Parkway Ave. Ewing, NJ; the link for virtual attendance is: https://webcasts.lifetributes.com/1083464. A Mass of Christian Burial will be celebrated at Our Lady of Good Counsel Church, 137 W. Upper Ferry Road at 11am. A Live web cast of the mass can be viewed here https://www.facebook.com/OlgcWestTrenton/ Interment will be in the Ewing Church Cemetery immediately following. Please visit www.murphyfh.com for additional information. In lieu of flowers, donations can be made in James' name to either the Ewing Twp. Historic Preservation Society or Jersey Valley Model Railroad Club c/o William (Bill) Howard, 7 Hamid Ct., Hamilton, NJ 08619.

James C. Peoples, 85, of Ewing died suddenly on Sunday at his home. Born in 1935 in Trenton, he was a life-long Mercer County resident. He graduated from Hamilton High School West '53. James began his career in carpentry at age 16 by completing... View Obituary & Service Information

The family of James C. Peoples created this Life Tributes page to make it easy to share your memories.

James C. Peoples, 85, of Ewing died suddenly on Sunday at his...

Send flowers to the Peoples family.