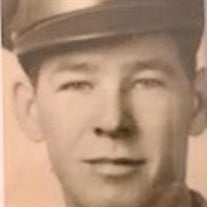 James W. Smith, Sr. of Hamilton, passed away suddenly after a brief illness on Tuesday, February 4, 2020 at Robert Wood Johnson Hospital in Hamilton. Mr. Smith was 97 years old. Born in Trenton to the late Miriam and William E. Smith, Sr. James served overseas in the United States Army Aircorps 8th Airforce during the World War II as a radio operator B17 from 1942 to 1945. James was a devout Christian and member of Our Lady of Sorrows Church. James enjoyed spending time with his wife Florence, and with family and friends. James enjoyed playing guitar and performing in the band "Country Gentlemen" with his brothers. James loved music, was an avid reader, a talented artist who loved to paint, and he enjoyed completing challenging puzzles. James was a life member of and a dear friend to many of the veterans of VFW Post 3525. He was an active member of Amvets Post 1776, and the Knights of Columbus of Hamilton. James retired from Firestone and went on to work at Burlington County College in their Printing and Graphics Shop. James also worked as a cartoonist for the Trentonian Newspaper. He is survived by his loving wife of 66 years, Florence (Woolverton) Smith; his children, Catherine and her husband Maurice R. Muise, James W. Smith, Jr., Edward T. Smith, Sr. and his wife Karen L. Smith, and Richard P. Smith; his siblings, William Jr., Thomas, John and Frank Smith, Mary Brenner and Norma Rawlins; and many grandchildren, great grandchildren and family. He was predeceased by his parents; a daughter in law Shea Smith; and his siblings, Dorothy, Lester, Kenneth, Robert Smith and Charlotte Favro. A visitation will be held on Tuesday, February 11, 2020 from 10:00 AM - 12:00 PM at the Murphy Funeral Home, 1863 Hamilton Avenue, Hamilton, NJ 08619 followed by a funeral service at 12:00 noon. Interment will take place at Brigadier General William C. Doyle NJ Veterans Cemetery, Wrightstown, NJ. In lieu of flowers, donations can be made in James' honor to VFW3525 in Hamilton or the Wounded Warrior Project. www.murphyfh.com

The family of James W. Smith Sr. created this Life Tributes page to make it easy to share your memories.

James W. Smith, Sr. of Hamilton, passed away suddenly after a...

Send flowers to the Smith family.