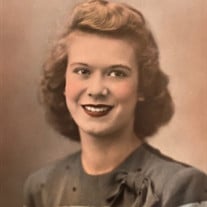 Jane Eastman Barnickel, 93, of Lawrenceville, passed away peacefully of natural causes on April 16, 2020. Jane was born to George and Mildred Ferguson in June 1926 in Jersey City, NJ. Jane graduated from Dickinson High School in 1944. She married her high school sweetheart, the late Donald Barnickel, Sr. in 1947, and they began raising a family in Jersey City and then Iselin before relocating to Metuchen in 1963, where they would reside for the next 49 years. She oversaw the finances for Barnickel Engineering Corporation, eventually becoming a majority owner. Jane was a compassionate volunteer; serving St. Luke's Episcopal Church in Metuchen, providing food and clothing for the needy, supporting service projects for the Rotary Club of Woodbridge, and then later teaching adults to read. Jane and her husband Don were avid square and round dancers. In her spare time, Jane enjoyed cooking, reading, and travel, especially to Hawaii where they renewed their wedding vows in 1990. Everyone was welcome in her home for a delicious meal, good cheer, or respite from a world of worry. Jane had a wonderful sense of humor which served her well as a great foil for her husband's wit. Jane was predeceased by her husband Don and her loving granddaughter, Casey McCarty. She is survived by her brother Robert Ferguson of Clifton Park, NY; daughters, Jane (Mark) McCarty of Charlottesville, VA, and Nancy (George) Scott of Ewing, NJ; son, Donald (Joan) Barnickel, Jr. of Flemington, NJ; grandchildren, Dustin and Patricia McCarty, Sonja Stang, Donald III and Jennifer Barnickel, great granddaughter Ava Patterson, as well as many nieces, nephews and other relatives. Jane will be interred alongside her husband at Washington's Crossing Memorial. A Celebration of Jane's Life will take place later this year. Special thanks are offered to the staff and residents at Morris Hall Meadows for their love, care, and support.

Jane Eastman Barnickel, 93, of Lawrenceville, passed away peacefully of natural causes on April 16, 2020. Jane was born to George and Mildred Ferguson in June 1926 in Jersey City, NJ. Jane graduated from Dickinson High School in 1944. She married... View Obituary & Service Information

The family of Jane Eastman Barnickel created this Life Tributes page to make it easy to share your memories.

Send flowers to the Barnickel family.