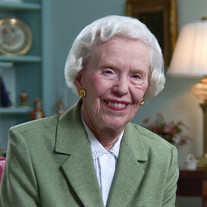 Janet Hill Hurst, 90, a very gracious lady, passed away August 5, 2017 at St. Mary's Medical Center, Langhorne, PA surrounded by her family. A lifelong Trenton area resident, she graduated from Miss Fines School (now PDS), then Harcum College. After college she worked at New Jersey Manufacturers Insurance Company, married, raised a family, then she went back to school to become a nurse and worked at Mercer Hospital. She was a volunteer at the New Jersey State Museum, Trent House, and Mercer Hospital. She also served as a lay person on the New Jersey Supreme Court Ethics Committee for many years. She was a member of the Daughters of the American Revolution, Junior League, Trenton Garden Club, Greenfingers Garden Club, the Present Day Club, Trenton Country Club and Nassau Club. She enjoyed playing bridge, golf and tennis with her wonderful friends. In her younger years, she was an accomplished equestrian. Daughter of the late C.V. and Christabel Sigler Hill, wife of the late Richard Pistell and the late Ray Hurst, Sr. (whom she was married to for 47 years), mother of the late Cris Pistell (who died in 1999), Janet is survived by two children and their spouses, Pam and Richard Lafferty of Pennington, NJ; Richard and Jackie Pistell of Dorset, VT; a step son and his wife, Ray Hurst Jr. and Susan of New Hope, PA; her brother and his wife, CV and Katie Hill of Pennington, NJ; two granddaughters, Gillian Pistell of New York City, and Lisa Pistell Lafferty residing in London, UK; a step-granddaughter, Hillary Schwartz and two step great-grandchildren of Dallas, Texas and her step-grandson Ryan Hurst of Boulder, CO. The family would like to thank all the staff at St. Mary's Medical Center, Woolman House at Pennswood Village, her family, and her many friends for all of the wonderful care and support they gave to Janet. Graveside service will be Tuesday 11:30AM at the Ewing Church Cemetery, Scotch Road, Ewing, NJ under the direction of the M. William Murphy Funeral Home, 935 Parkway Ave., Ewing. Please visit www.murphyfh.com for additional information. In lieu of flowers, the family requests memorial contributions in Janet's honor be made to: TASK, PO Box 872, Trenton, NJ 08605 or The Rescue Mission of Trenton, 98 Carroll Street, Trenton, NJ 08609

The family of Janet created this Life Tributes page to make it easy to share your memories.

Send flowers to the Hurst family.