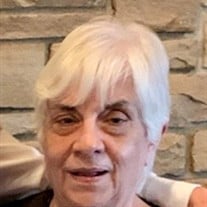 Janet Louise McKnight, 75, passed away on Friday, February 28, 2020 at Capital Health Regional Medical Center. Born in Brooklyn, NY to the late William and Marian (Bunker) McKnight. Janet was a proud alumni of Rutgers University School of Agriculture, where she received her Bachelors Degree in 1966. She was a member of the Genealogy Club in Trenton, and loved taking wine tasting classes at Mercer County College. Janet had a special love for quilting and basket weaving. She was especially passionate to all animals. A loyal employee to Bell Atlantic, Janet spent her 30 year career with the company as a Central Office Tech. Janet is survived by her loving sisters, Kathryn McKnight and Phyllis McKnight Bulaga; her nieces and nephews E. Christian D'Antonio, Justin William D'Antonio, Jacqueline L. Bulaga, and Jenniffer Whitworth; her great nieces and nephews Timothy, William, Maximus, Alex, Anders, Hailey, Dylan, Muiread, as well as, many dear friends. Visitation will be Wednesday, March 11, 2020 from 9:00 - 11:00 AM at the Murphy Funeral Home, 935 Parkway Avenue, Ewing, NJ 08618. Interment to follow at Mt. Holly Cemetery, Mt. Holly, NJ In lieu of flowers, donation may be made in Janet's name to the EASEL Animal Rescue League at www.easelnj.dojiggy.com

The family of Janet McKnight created this Life Tributes page to make it easy to share your memories.

Send flowers to the McKnight family.