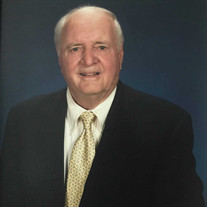 John P. "Jack" Belli, Sr., 92 passed away on July 30, 2017 at home surrounded by his loving family. Born and raised in Trenton, Mr. Belli later lived in Lawrenceville and Pennington, NJ, and Jupiter, FL. He was retired, having spent forty years as a Co-Owner of the Belli Company, a construction firm founded by his father, Simon Belli, in 1920. During the first thirty years under the founder, the company built Trenton Central High School, the War Memorial Building, the Lakehurst Naval Air Station, and the State House Annex, among other projects. Subsequently, the sons constructed St. Francis Hospital, the eleven building campus of Mercer Community College, the Labor and Industry Building, the New Jersey State Museum Cultural Complex, West Windsor High School South, as well as projects at Princeton University and the Lawrenceville School. A veteran of World War II, having served in the Army Corps of Engineers in Germany and the Philippines, Mr. Belli graduated from the Lawrenceville School and the University of Pennsylvania with B.A. and a Masters Degree in Architecture. He was a Trustee of the Stuart Country Day School of the Sacred Heart, the New Jersey State Museum, Mercer County Community College and Martin House. He served as President of the Fathers Association of the Lawrenceville School. Son of the late Simon and Teresa De Vido Belli of Trenton, NJ, and the brother of the late Simon H. Belli of Lawrenceville, NJ, he is survived by his wife, Maude Meehan Belli and three sons: John P. Jr. and Adrienne of Pennington, NJ; Noel G. and Kathleen Belli of Wyckoff, NJ; Mark C. and Barbara of Jupiter, FL, and two daughters; Marjorie Eno of South Freeport, ME, and Anne-Marie Belli of New York City; as well as seven grandchildren: John P.III and Drew Belli of Pennington, NJ; Megan, Michael and Suzanne Belli of Wyckoff, NJ; Amos and Angus Eno of South Freeport, ME. Family and Friends are invited to gather on Thursday, August 3, 2017 from 10AM-11AM at St. James Church, 115 E Delaware Ave, Pennington, NJ. Mass of Christian Burial will be celebrated at 11AM. Private interment will follow in St. Mary's Cemetery. In lieu of flowers, contributions may be made to the charity of the donor's choice.

John P. "Jack" Belli, Sr., 92 passed away on July 30, 2017 at home surrounded by his loving family. Born and raised in Trenton, Mr. Belli later lived in Lawrenceville and Pennington, NJ, and Jupiter, FL. He was retired, having spent forty... View Obituary & Service Information

The family of John P. Belli created this Life Tributes page to make it easy to share your memories.

Send flowers to the Belli family.