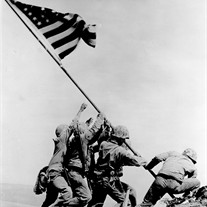 John M. "Jack" Cole, 90, died Tuesday at Chandler Hall in Newtown after a long battle with cancer. A Marine Corps veteran of World War II, Jack survived the Battle of Iwo Jima while still a teenager and later wrote a memoir and several poems about the horrific impact of combat on young soldiers. He also served on Guam and in China during his three years in the Marines. A gentle and sensitive man, Jack revisited the South Pacific years after the war and participated in joint ceremonies honoring those who had fought against each other, but who reunited in friendship and respect. Born in Mansfield, Ohio, on Jan. 28, 1927, Jack grew up in Trenton, N.J., and graduated from Trenton Central High School in 1944. He worked as a mechanical engineer for many years with the Thomas and Betts Corp. During his professional career, he became the holder of 12 patents related to manufacturing products and processes. For exercise, Jack loved to play tennis and take long walks through the hills of Bucks County and along the oceanfront in Boca Raton, Fla. Jack is survived by his wife, Elizabeth "Betsy" Salvatore Cole; a daughter, Karen Wies (Richard) of Branford, Conn.; two granddaughters, Summer Wies of San Francisco and Claudia Wies of Denver; a sister, Sara "Sally" Brown of Westfield, N.J.; two brothers, Paul R. Cole (Arlene) of Palo Alto, Ca., and Phillips R. Cole (Linda) of Tarpon Springs, Fla.; four sisters-in-law: Margaret "Peggy" Salvatore, Mary Ellen Schragger, and Susan Salvatore Manion (Jim), all of Ewing Township, N.J., and Adrienne Salvatore Boyd of Coconut Creek, Fla., and many nieces and nephews. Jack was predeceased by his parents, Herbert H. and Manola Vero Cole; a brother, Edward Cole, and two sisters, Patricia Marks and Muriel Hubschmitt. The Cole Family would like to thank Jessica, Cindy and Susan of the Chandler Hall hospice team for their kindness and compassion throughout Jack's experience with the facility. Services will be held Monday, Nov. 20, at the William Murphy Funeral Home, 935 Parkway Ave., Ewing Township, N.J. Friends may call from 10 a.m. until 11 a.m. when there will be a service at the funeral home. Entombment will be private. In lieu of flowers, donations are welcome in Jack's memory to a charity of choice.

The family of John M. Cole created this Life Tributes page to make it easy to share your memories.

Send flowers to the Cole family.