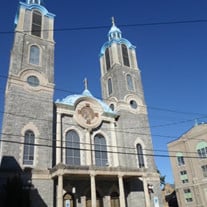 TRENTON, NJ - John D. Yanno, Sr., 89, passed away peacefully on Sunday, March 11, 2018 at Bridgeway Care Center in Hillsborough, NJ. A lifelong resident of Trenton, NJ, John was a faithful member of St. Mary's of the Assumption Byzantine Catholic Church where he served as an usher, and was a member of the Men's Club, and the Holy Name Society. He was also an active worker in their weekly bingo. John is a graduate of St. Mary's Grammar School and Trenton Catholic Boy's High School. Following honorableservice in the United States Army during the Korean War, John worked39 years as a freight and passenger conductor for Amtrak where he retired in 1990. John was an avid golfer and horse-racing fan with a particular fondness for gray horses. Along with his wife, MaryAnn, he was a frequent visitor to Atlantic City and Las Vegas and loved the game of keno. John was predeceased by his son, John D. Yanno, Jr. as well as his parents, Mary and Michael Yano and siblings, Michael Yanno , George Yano and Margaret Kowalski. He is survived by his loving wife of 67 years, MaryAnn Yanno(nee Kuzma). Devoted father of Diane Kutch and husband Ken of Hillsborough, NJ and his son Thomas Yanno and his wife Patricia of Voorhees, NJ. He is also survived by his grandchildren, Kristin Rangel, Allison Zaudke, Kelsey Kutch, Nicolas Yanno and Kaylee Yanno as well as great-granddaughters Alexandra and Madison, his sister-in-law Matilda Yanno, Hilda Bastecki and her husband Joseph, brother-in-law Michael Kuzma as well as numerous nieces, nephews and cousins. Funeral services will be held on Thursday, 9am from the Murphy Funeral Home, 1863 Hamilton Ave., Hamilton followed by Office of Christian Burial at 10am in Assumption of the Virgin Mary Byzantine Catholic Church, Grand and Malone Streets, Trenton. Interment with military honors will be held in Assumption of the Virgin Mary Byzantine Catholic Cemetery (No. 2) in Hamilton. Relatives and friends may share their condolences with the family from 5 - 8pm on Wednesday at the funeral home. Parastas will be held at 5pm. In lieu of flowers, memorial contributions may be made in John's name to Assumption of the Virgin Mary ByzantineCatholic Church, 411 Adeline Street, Trenton, NJ 08611.

The family of John D. Yanno, Sr. created this Life Tributes page to make it easy to share your memories.

Send flowers to the Yanno family.