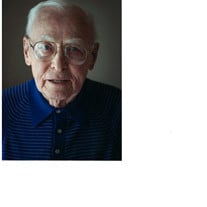 J. George Burke of Ewing, NJ passed from this life on November 12, 2017. He was 89 years old. Son of the late John T. and Mary C. Burke and brother to the late John S. Burke, David T. Burke, A. Patricia Schwing, and Thomas R. Burke, George was born and raised in Trenton, NJ. He lived in Ewing for over 40 years before moving to Pennington. He spent the last 18 months at Morris Hall Meadows in Lawrenceville. George will be greatly missed by his sister and brother-in-law, Mary and Robert Hazen; his brother-in-law, John Schwing; his sister-in-law, Sharon Burke, and his 13 nephews and nieces, Kevin Burke, Dennis Burke, Patricia Devlin, Maureen Fritsky, John Burke, David Burke, Michael Schwing, Donald Burke, Terrance Schwing, Moira Spalten, Rosemary Taylor, Heather Burke, and Kerry Burke. He also had 20 great nephews/nieces and 4 great-great nephews/nieces. George devoted his life to the needs of others. His family was particularly blessed by his kindness and generosity. George attended St. Mary's Grammar School and Trenton Catholic Boys High School. After graduation, he was employed with New Jersey Manufacturers Insurance Company. He remained in their employment for 44 years serving in various departments and retired in 1993 as a corporate officer. George was a life member of the Trenton Elks Lodge #105 for over 60 years. He was a daily communicant of the Incarnation-St. James Parish and a proud supporter of the parish school. He was particularly fond of the Sisters of the Immaculate Heart of Mary who were assigned to the parish and the school. The family will receive friends on November 18, 2017 from 9:30 to 11AM at Incarnation Church, 1545 Pennington Road, Ewing, NJ. A requiem mass will be offered for the repose of his soul at 11AM. Arrangements are under the direction of the Murphy Funeral Home, 935 Parkway Ave., Ewing, NJ. Please visit www.murphyfh.com for additional information. In lieu of flowers, the family would appreciate donations be made to the Sisters of the Immaculate Heart of Mary, Villa Maria House of Studies, 1140 King Road, Immaculata, PA 19345-0200 Attention: Mission Advancement.

The family of Joseph George Burke created this Life Tributes page to make it easy to share your memories.

J. George Burke of Ewing, NJ passed from this life on November...

Send flowers to the Burke family.