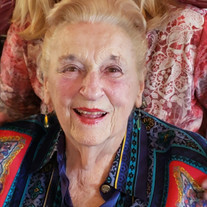 Joyce Lawson Moore passed away peacefully at her home in Brick, New Jersey surrounded by her loving and devoted family and friends in the early hours of Sunday, December 19. Widow of Adrien (Ace) D. Moore Jr, she was born in Trenton at Mercer Hospital. The only child of J. Milton and Lulu V. Lawson, she was a lifelong Trenton/Ewing resident except for her recent years at the Jersey shore. Joyce graduated prep school from George School (class of '44) in Newtown, Bucks County, Pennsylvania and obtained her BA from Mount Holyoke College (class of '48) in South Hadley, Massachusetts – the first of the Seven Sisters consortium of prestigious East Coast liberal arts colleges for women – the equivalent to the once all male Ivy League schools. Joyce's professional career evolved around state politics. Active all her life in local Republican politics, in the beginning of her career, she enjoyed her work as Executive Assistant to the New Jersey State Republican Committee Chairmen. Her part-time work as an Assistant and Legislative Researcher for the State of New Jersey's General Assembly Legislative Minority Staff gave her entre into a twenty-seven year career she loved as the Manager for one of the most prominent lobbying firms on West State Street during the administrations of Governors Byrne, Kean, Whitman, DiFrancesco and McGreevey. After retirement Joyce traveled the world and enjoyed discovering new places, cultures and always making new friends. She had a special interest in re-visiting countries in Southeast Asia. Her impressive intelligence and zest for life that Joyce demonstrated throughout her lifetime cannot be overestimated. She will be greatly missed by everyone that knew her. Raised in Trenton's Prospect Street Presbyterian Church, Joyce became a Member of Trinity Episcopal Cathedral in Trenton with her husband in 1962 and brought their children up as parishioners there. The Lawson family was prominent in Trenton's pottery business in the late 1800's early part of the 1900's. Lawson China decorating company merged in 1914 to form the firm of Tatler and Lawson. The firm imported English china and finely decorated it at its establishment on Monmouth Street in Trenton. During that time, the company was one of the top fine china suppliers for John Wanamaker's of Philadelphia. The Tatler and Lawson families stayed friends throughout the years. Daughter of the late James Milton and Lulu V. Loepsinger Lawson and wife of the late Adrien (Ace) David Moore Jr., she is survived by her two sons: A. David Moore III of Brick, Keith Lawson Moore of Alexandria, Virginia, Daughter-in-law Bernadette Keenan Moore of Brick; three grandchildren: A. David Moore IV and wife Krysta Peregrin Moore of Little Egg Harbor Twp., Marie Erin Moore and Paige Lawson Moore of Brick, and two great grandchildren she adored during her last years: Adrien David Moore V and Raeya Michelle Moore. Calling hours will begin at 11:00 with Service at noon on Thursday, December 30th at All Saints Chapel of Trinity Episcopal Cathedral, 801 W. State Street, Trenton. Burial will be in Ewing Church Cemetery. Charitable contributions to the charity of your choice in Joyce's name are most welcome. Arrangements are under the direction of M. William Murphy Funeral Home, Ewing.

Joyce Lawson Moore passed away peacefully at her home in Brick, New Jersey surrounded by her loving and devoted family and friends in the early hours of Sunday, December 19. Widow of Adrien (Ace) D. Moore Jr, she was born in Trenton at Mercer... View Obituary & Service Information

The family of Joyce Lawson Moore created this Life Tributes page to make it easy to share your memories.

Joyce Lawson Moore passed away peacefully at her home in Brick,...

Send flowers to the Moore family.