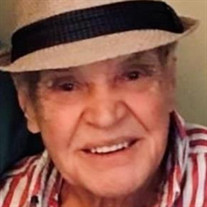 Juan Agustin Camacho, known to family and friends as Johnny or Nito, age 83 peacefully passed on Thursday Oct 1, 2020 surrounded by his loving wife Iris Camacho and his daughters Iris, Brenda, Susan, Raquel and son-in-law Epifanio at Jefferson Torresdale Hospital in Philadelphia, PA. From his birth in Yabucoa, Puerto Rico on May 16, 1937 to his passing he was treasured the moment someone would meet him because of his affectionate and bright smile. He was raised in the countryside (campo) of Martorell in Yabucoa, Puerto Rico with his father Claudio Camacho, his mother Susana Burgos Camacho and his 10 siblings. At the age of 16 he traveled from Puerto Rico to Trenton, NJ where he started his career in the restaurant business. By 18 yrs. old he was working at the Nassau Inn in Princeton, NJ then over to the Princeton Inn where he worked as a butcher. He met his wife, Iris Milta Torres and Father Arman married them on May 20, 1962 at Mount Carmel Church on Perry Street, Trenton, NJ. His career shifted him to move his young family to 14th Street between 1st and 2nd Ave in Lower East Side Manhattan, NYC. He worked as a building superintendent while he owned and operated several delicatessens (bodegas). He purchased a summer home on Grand St. in Trenton, NJ where it then became their permanent residence. His drive and passion got him into real estate investments in Trenton while also buying and selling cars from the lot next to his home on East State Street in Trenton. He was a recent Lung Cancer survivor and was in remission at the time of his passing. He is survived by his wife, Iris M. Camacho, his 6 children Juan Camacho (Maria), Iris Nieves (David), Susan Rodriguez (Robert), Brenda Figueroa (Epifanio), Claudio Camacho and Raquel Camacho, six of his 10 siblings, 14 grandchildren and 18 great grandchildren. The family will greet family and friends for funeral viewing services which will be held on Wednesday, October 7, 2020 from 6:00 PM to 8:00 PM at Murphy Funeral Home, 935 Parkway Avenue, Ewing, NJ 08618. Mass service will be held on Thursday, October 8, 2020 at 10 AM. being held at Cathedral of St. Mary of the Assumption, 151 North Warren Street, Trenton, NJ with Burial to follow at St. Mary's Cemetery, 1200 Cedar Lane, Hamilton, NJ 08619. The family would like to extend their gratitude to Einstein Cancer Center, Dr. Goldstein and Dr. Priya Mitra along with their exceptional caring staff. And to the ICU Trauma Unit staff at Jefferson Torresdale Hospital for their attentiveness and loving care.

The family of Juan Agustin Camacho created this Life Tributes page to make it easy to share your memories.

Juan Agustin Camacho, known to family and friends as Johnny or...

Send flowers to the Camacho family.