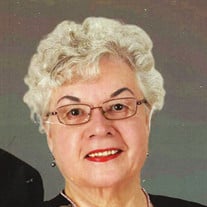 Judith Bannister Peoples, 78, of Ewing passed away suddenly on Wednesday at her home. Born in 1939 in Trenton, she was a life-long Mercer County resident. She graduated from Hamilton High School West and Trenton State Teachers College (TCNJ). She began her extensive professional career as a business teacher at Bordentown Regional High School. She took a break to raise her 5 children. During that time, she served as PTA president and was awarded lifetime membership in NJPTA. Upon returning to work she served as Coordinator of Public Information for Hamilton Schools. As an entrepreneur she began a business with her dear friend Glenda Cain. She was recruited to apply her skills as a Research Associate for the NJ State Senate. This led to a position with the NJ School Boards Association as Director of Governmental Relations and Acting Executive Director from which she retired. She returned to public service as a Lobbyist for NJ Joint Council County Special Services School Districts and she was the Founding Chair of the Ewing Twp. Redevelopment Agency serving as its Commissioner; Chair of the Ewing Twp. Economic Development Advisory Commission; and she repeatedly held the title of President of the Ewing Twp. Historic Preservation Society. Daughter of the late George and Mary Alexander Bannister, niece of the late Helen Thompson and her former husband Sydney, sister-in-law of the late Richard Cincilla and Paul Peoples, she is survived by her husband of 57 years, James C. Peoples; her children, James E. Peoples and his wife Lynnette, David L. Peoples, Elizabeth P. Czelusniak and her husband Steven, John Alexander Peoples and his wife Kristi, and Rebecca P. Lynn and her husband Steven; grandchildren, M. Benjamin, Ashley, William, Nathan, and Charles Peoples; Aaron, Sean and Sydney Lynn; and Olivia and Emily Czelusniak; her sister, Barbara Cincilla and family; cousin Barry and Larissa Thompson; her in-laws Agnes Peoples, Louis and Janice Peoples, Delores and Larry Vannozzi, Donald and Mary Peoples; and many nieces and nephews. The family will receive friends on Monday from 11am until 1pm and from 6 - 9pm at the Murphy Funeral Home, 935 Parkway Ave., Ewing, and again on Tuesday at Our Lady of Good Counsel Church, 137 W. Upper Ferry Road from 9 - 11am. A Mass of Christian Burial will be celebrated at 11am followed by interment in Ewing Church Cemetery. In lieu of flowers, donations can be made in Judith's name to either the Ewing Twp. Historic Preservation Society, 27 Federal City Road, Ewing, NJ 08638 or Fisher House Foundation, 12300 Twinbrook Pkwy, Suite 410, Rockville, MD 20852. https://www.fisherhouse.org/ways-to-give/donations

Judith Bannister Peoples, 78, of Ewing passed away suddenly on Wednesday at her home. Born in 1939 in Trenton, she was a life-long Mercer County resident. She graduated from Hamilton High School West and Trenton State Teachers College (TCNJ). She... View Obituary & Service Information

The family of Judith Bannister Peoples created this Life Tributes page to make it easy to share your memories.

Judith Bannister Peoples, 78, of Ewing passed away suddenly on...

Send flowers to the Peoples family.