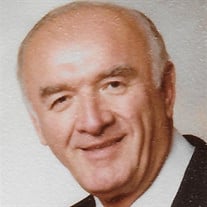 Leon J FornaL, 89, of Lawrenceville, passed away on Sunday, March 3, at Morris Meadows in Lawrenceville. Known as the "Polka King" in the local area, Leon was born in Trenton, where he remained a resident in the local community. After his years in the U.S. Marines, Leon was employed by the Mercer County Mosquito Commission and became the Superintendent, retiring in 1991 after 35 years of service to reside in Lawrenceville with his wife, Dolores. Leon entered the music business at an early age and started his own Polka band called the Polka Dots and later the Polka Kats. He played hundreds of weddings and events throughout Delaware Valley. He retired from the band in 1990 after nearly 40 in the business. Leon hosted the longest running Polka Show in NJ beginning in 1959.. His career began at WAAT in Trenton. The 30 minute Polka Show grew to 2 hours at WTTM in Trenton and ultimately became "the Best 2.5 hours of Your Day" when he finally retired in 2004 from WBCB in Levittown, PA.. Over the years, Leon enjoyed doing the Polka Show with his son, Tom, and his grandson, Kevin. During the 1980's and 90's, Leon organized and ran "Polka's in the Poconos" which was attended by numerous Polka performers and by thousands of fun loving Polka dancers. As a promoter of Polish music, Leon participated the Pulaski Day Parade in Philadelphia, was named the Man-of-the-Year by the Polish Police of Philadelphia; he was a member of the Polish American Congress of Trenton; he emceed radio-thons for the American Cancer Society. For nearly 20 years, Leon was the Masters of Ceremonies at the Trenton Thanksgiving Day Parade and the Polish American Festival at the Shrine of Our Lady of Czestochowa in Doylestown, PA.. Highlights of his professional life included a private audience he and his wife, Dolores, had with Pope John Paul II in Rome in 1996 and a luncheon at the White House with President Ronald Reagan in 1983. Son of the late Michael and Mary Honorska Fornal and husband to his late wife Dolores Shelby Fornal, he is survived by his son Thomas and Elizabeth Fornal; his daughter Patricia and Dale Overton of Wentzville, MO; four grandchildren Christopher Fornal(Carrie); Dale Overton (Gina); Shaun Overton; Kevin Fornal (Lily) and 5 great-grandchildren. The family will receive friends on Saturday, March 9, from 9:30 to 10:30am, in the Chapel of the Church of St. Ann , 1253 Lawrenceville Road, Lawrenceville, NJ 08648. Mass of Christian Burial will be celebrated at 10:30am in the church. Burial will follow in St. Mary's Cemetery, Hamilton. Arrangements are under the direction of the Murphy Funeral Home, Ewing.

Leon J FornaL, 89, of Lawrenceville, passed away on Sunday, March 3, at Morris Meadows in Lawrenceville. Known as the "Polka King" in the local area, Leon was born in Trenton, where he remained a resident in the local community. After his... View Obituary & Service Information

The family of Leon J. Fornal created this Life Tributes page to make it easy to share your memories.

Leon J FornaL, 89, of Lawrenceville, passed away on Sunday, March...

Send flowers to the Fornal family.