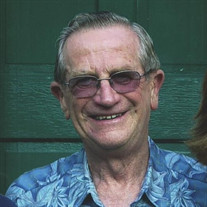 Leon "Lee" Gruska, age 86, died peacefully Wednesday, May 8, 2019 in his home. Lee was born in South River, N.J. on September 14, 1932. He attended South River schools, graduated from South River High School in 1950, and from Rutgers University in 1954, with a degree in Romance Languages. From 1955 to 1957, Lee served with the First Armored Infantry in Texas and Louisiana, where he rose to the rank of 1st Lieutenant. Lee retired, after 30 years of service with the Division of Youth and Family Services (DYFS), where he started as a caseworker. After several years of employment, he enrolled at Florida State University, where he graduated with a Masters degree in Social Work, (MSW), and returned to DYFS to serve in many supervisory positions. After leaving DYFS, he was employed for 7 years as a Renal Social Worker at Fresinius Medical Care. Lee married Ann Donlon in 1972, and together, they resided in Bordentown, N.J., Southport, N.C., and Lawrenceville, N.J. Lee was an avid bowler for more than 60 years, and enjoyed singing barbershop harmony with the Princeton Garden Statesmen Barbershop Chorus for more than 15 years. He also enjoyed volunteering his time and talents in several ministries at the Church of Saint Ann, Lawrenceville, N.J. He is survived by his beloved wife, Ann, their son David and daughter-in-law, Amy, their wonderful grandchildren, Jeffrey and Lindsay, as well as several cousins and many close friends. A funeral Mass will be celebrated at The Church of Saint Ann on Monday, May 13th at 12PM. Visiting hours will be from 10:30-12 at the chapel before mass. Burial will follow at the Wm. C. Doyle Veterans Cemetery, Wrightstown, N.J. Murphy Funeral Home, Ewing/Hamilton is in charge of arrangements. In lieu of flowers, the family has requested that memorial contributions be made in his memory to the Saint Ann Faith Development Center.

The family of Leon S Gruska created this Life Tributes page to make it easy to share your memories.

Send flowers to the Gruska family.