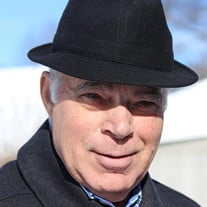 Manuel Jesus Silva, 79 Years, of Hamilton, formerly of Perth Amboy passed away on March 4th. He was born on January 28, 1940 to the late Diamantino and Arminda da Silva in Mamarosa, Portugual. He was a member of Portuguese Sporting Club of Perth Amboy. Born in Portugual, he came to the United States to with his family to raise his daughter. He was proud of his Portuguese background but was equally as proud to become a United States citizen. Manuel worked for Heavy and General Labors Union 472/172 for over 20 years. Portuguese Club of Perth Amboy for many years. He was a green thumb who could make anything grow. He was particularly fond of his vineyard trees making his own wine. He also enjoyed cooking on his brick oven that he built in is back yard. A skilled craftsman, he was excellent at building and repairing things, enjoyed the outdoors, nature, birds and his pet dove. An avid soccer fan, he loved watching the sport on TV. Manuel is survived by his loving spouse of 59 years Dorinda Silva of Hamilton, daughter, Natalia Loh and husband Scott of Mercerville, NJ; two sisters, Herminia Migueis and Gracinda Jesus Silva; Two Grandchildren, Melissa Erica Estler and husband Tyler, Brittany Marie Loh, and great grandson Dylan. He was preceded in death by father, Diamantino Jesus, mother, Arminda da Silva, Brother, Esais Jesus. Family and friends are invited to remember Manuel during visitation On Thursday, March 7th from 5-9PM at Murphy Funeral Home and Cremation Service, 1863 Hamilton Ave, Hamilton, NJ. Funeral services will be held on March 8th, 11AM at the Grace-St Paul's Episcopal Church, Hamilton, NJ, entombment will follow in Greenwood Cemetery, Hamilton. Memorials are suggested to the American Cancer Society via www.cancer.org and or American Heart Association via www.heart.org . Online condolences can be given at www.murphyfh.com .

Manuel Jesus Silva, 79 Years, of Hamilton, formerly of Perth Amboy passed away on March 4th. He was born on January 28, 1940 to the late Diamantino and Arminda da Silva in Mamarosa, Portugual. He was a member of Portuguese Sporting Club... View Obituary & Service Information

The family of Manuel Jesus Silva created this Life Tributes page to make it easy to share your memories.

Send flowers to the Silva family.