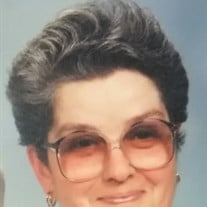 Margaret S. Graziano (92 years old) died peacefully on April 6, 2022. Born on October 21, 1929, she was a life-long resident of Trenton / Hamilton Township. She was the daughter of Augustus T. Stewart and Mary Cahill Stewart. She graduated from Cathedral High School and worked for a time as an operator at Bell Telephone. Margaret was married to Francis A. Graziano, Jr. on April 21, 1951. They were married for fifty-one years and had eight children. Margaret was a homemaker while her children were young but later began working outside of the home, first as a key punch operator in the early days of computers and then as a bookkeeper in several offices. She was an avid swimmer and walker. Margaret did volunteer work answering phones for Contact of Mercer County, a crisis and suicide prevention hotline. She also did volunteer work at local hospitals, including acting as a Eucharistic Minister. Margaret was pre-deceased by her husband Francis, her daughter and son-in-law Mary Alice and Jon Malkin, her son-in-law David Krell, her brother Augustus T. Stewart, Jr., and her sister Mary Jane Mulcahy. She is survived by her children: Anne Krell, James Graziano, Frank Graziano and his wife Deborah, Thomas Graziano, Theresa Graziano and her husband Bruce Katlin, David Graziano and his fiancée Amy Madia, and Paul Graziano. She is also survived by 4 grandchildren: Joseph Krell and his wife Allison, Daniel Krell, Thomas Graziano and Andrew Graziano and his girlfriend Ali Hiltey; and 3 great grandchildren: Benjamin and Molly Krell and Liliana Graziano; as well as several nieces and nephews. Services will be held on Tuesday, April 12, 2022, at Our Lady of Sorrows Roman Catholic Church, 3816 E. State Street Ext., Hamilton, NJ 08619. Visitation will begin at 10:00AM at the church followed by the Funeral Mass at 11:00AM. Burial will be private. In lieu of flowers, donations may be made to: Eternal Word Television Network (EWTN), 5817 Old Leeds Rd., Irondale, AZ 35210 (ewtn.com); or Community Food Bank of NJ, 6735 Black Horse Pike, Egg Harbor Twp, NJ 08234 (cfbnj.org)

Margaret S. Graziano (92 years old) died peacefully on April 6, 2022. Born on October 21, 1929, she was a life-long resident of Trenton / Hamilton Township. She was the daughter of Augustus T. Stewart and Mary Cahill Stewart. She graduated... View Obituary & Service Information

The family of Margaret S. Graziano created this Life Tributes page to make it easy to share your memories.

Send flowers to the Graziano family.