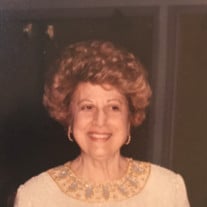 Mary E. Blazakis O'Donnell, 97, of Yardley, PA, passed away peacefully on April 3, 2017 at Simpson Meadows in Downingtown, PA. Born in Martin's Ferry, Ohio, Mary has been a resident of Yardley since 1971. Mary worked for many years in the law profession, in both the private sector, as well as for the State of New Jersey. Mary was an entrepreneur and enjoyed taking on an intellectual challenge, always stating the importance of education. In the 1950s, Mary was the host of a Greek radio program. Mary proudly embraced her Greek culture. She was a vibrant and active member of St. George Greek Orthodox Church, Founding officer of Cretan's of Delaware Valley, held many positions in the Daughters of Penelope, President & Founder of Yardley Ladies' Investment Club, and was also a member of Lower Makefield Seniors. Mary was continually involved with volunteering and bettering the lives of others. She always had a smile and brightened the day through her songs and reciting of poetry. Mary was predeceased by her parents: Nicholas Blazakis and Evangeline "nee Despinopetrakis" Blazakis; her husband John O' Donnell; and six siblings: Jimmy, Sophie, Anastasia, George, John and Tony. She is survived by her daughter, Evangeline Kern and her husband George Kern of West Chester; three grandchildren, Catharine, George, and Allyson Kern, and many nieces, nephews, cousins and friends. A visitation will be held on Thursday, April 6, 2017at St. George Greek Orthodox Church, 1200 Klockner Road, Hamilton, NJ 08619 from 10AM-11AM. A Funeral service will follow at 11AM at the Church. Interment will take place following the service at Greenwood Cemetery, Hamilton. In Lieu of Flowers, donations can be made to St. Matthew's Greek Orthodox Church Colosseum Plaza II, 8477 Allentown Pike, Blandon, PA 19510 which is the church of Father DemetriusNicoloudakis (Mary's nephew).

Mary E. Blazakis O'Donnell, 97, of Yardley, PA, passed away peacefully on April 3, 2017 at Simpson Meadows in Downingtown, PA. Born in Martin's Ferry, Ohio, Mary has been a resident of Yardley since 1971. Mary worked for many years in the law... View Obituary & Service Information

The family of Mary E. Blazakis O'Donnell created this Life Tributes page to make it easy to share your memories.