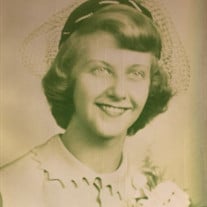 Mary E. "Betty" Brooks, 91, of Ewing passed away on January 28th at Capital Health System - Hopewell. Born in Amsterdam, NY, she moved to Trenton to attend Rider College. She graduated in 1948 with honors, earning a BA in Journalism. There she met her husband, the late Robert F. Brooks. The two married and lived in Ewing for 60 years where they raised four children. Mrs. Brooks was a librarian with the College of New Jersey and the NJ State Library for more than 25 years before her retirement. A voracious reader, she was a frequent writer of poetry. Mrs. Brooks loved shopping, horseracing at Monmouth and Saratoga tracks (she never missed a Kentucky Derby), autumn trips to the Poconos, and family vacations at the Jersey Shore. Her most defining quality was her devotion to her husband, children, grandchildren and great-grandchildren. Daughter of the late Charles S. and Edith Isaacs Broeffle, wife of the late Robert F. Brooks, mother of the late Frances A. Brooks, she is survived by two daughters and a son-in-law, Elaine Brooks of Ewing, and Alicia and Jim Waltman of Hopewell; a son and daughter-in-law, Robert J. and Joann Brooks of Ewing; seven grandchildren; Erica, Bobby, Kevin and Megan Brooks; Julia Schanne and husband John; and Emma and Jimmy Waltman; two great grandchildren, John Henry and Joanna Elaine Schanne; and three nieces, Betsy Paton, Barbara Rickard, and Helen Lee Martin. The family would like to extend a special thank you to Mrs. Brooks' caregiver, Tetla Miller. The family will receive friends on Sunday, Feb. 3rd, from 3 - 5 p.m. at the Murphy Funeral Home, 935 Parkway Ave., Ewing. Mass of Christian Burial will be celebrated on Monday, Feb. 4th, at 10 a.m. in The Church of the Incarnation, 1545 Pennington Road, Ewing. Burial will follow at a later date. Please visit www.murphyfh.com for additional information. In lieu of flowers, memorial contributions in her name may be made to the American Red Cross, P.O. Box 37839, Boone, IA 50037-0839 or www.redcross.org/donate .

Mary E. "Betty" Brooks, 91, of Ewing passed away on January 28th at Capital Health System - Hopewell. Born in Amsterdam, NY, she moved to Trenton to attend Rider College. She graduated in 1948 with honors, earning a BA in Journalism. There she... View Obituary & Service Information

The family of Mary E. Brooks created this Life Tributes page to make it easy to share your memories.

Send flowers to the Brooks family.