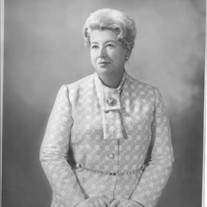 Mary McCormack Gray passed away peacefully on Saturday, August 31, 2019 at the age of 96 years. She was the daughter of the late John and Anna McCormack, and sister to the late, John, Charles, Katherine (Webb), and Jean (Irwin). Mary was born and raised in Pennington, NJ and lived in Ewing Township, NJ for most of her life before moving to Belle Mead, NJ. She is survived by generations of nieces and nephews who know her as Mimi. Mary began her career at DeLaval Steam Turbine Company and Philadelphia Gear Works where she worked for more than a decade. Mary was also a marketing executive with The Thiokol Corporation for most of her professional career. In addition to a successful career, Mary was very much engaged in the community where she was the past president of the Trenton Business and Professional Woman's (BPW) Club, district director for the Central NJ State Foundation of BPW, honored as State Federation BPW, involved in the Political Action Committee where her primary focus was the Equal Rights Amendment passage, and a Past President of Soroptimist International of Trenton. She was involved in the formation of the Mercer County Commission on the Status of Women, where she was the charter commissioner. She supported the organization of the WOMANSPACE and participated in various programs with the Mercer County Chamber of Commerce. She was the Vice Chair of the Ewing Action Council and served on the Board of Directors of the Trenton branches of the Urban League and the Delaware Valley United Way, Women's Political Caucus. Mary was also involved with the American Diabetes Association and a member of the Trenton Bicentennial Committee. After retirement, she continued her role as a volunteer for another 25 years with the Mercer Medical Center (Capital Health System at Mercer) Auxiliary where she was involved in nursing scholarships, fundraising and the liaison to the Department of Volunteers. She served as Executive Vice- President, President, and member of the Hospital Board of Directors during her tenure as President of the Auxiliary. Mary has been a role model as a professional in business, a volunteer in her community and a loving family member her entire life. She made a difference in the lives of everyone she touched. Relatives and friends are kindly invited to attend Mary's visitation on Saturday, September, 7, 2019 from 9am to 10am at the St. James Church in Pennington, NJ, with a Mass of the Christian Burial to follow at 10am. Following the mass, Mary will be laid to rest at the Ewing Cemetery. In lieu of flowers, contributions may be made in Mary Gray's memory to Capital Health's Auxillary, c/o Volunteer Services, Two Capital Way, Pennington, NJ 08534.

Mary McCormack Gray passed away peacefully on Saturday, August 31, 2019 at the age of 96 years. She was the daughter of the late John and Anna McCormack, and sister to the late, John, Charles, Katherine (Webb), and Jean (Irwin). Mary was born... View Obituary & Service Information

The family of Mary Gray created this Life Tributes page to make it easy to share your memories.

Send flowers to the Gray family.