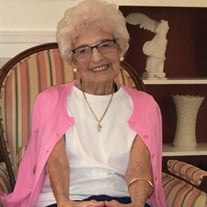 Mary Blazakis Paratheras passed away on February 1st, 2022 at the age of 98. The longtime Lawrence Township resident was born and raised in New Brunswick, New Jersey to Katy and James Blazakis. Mary, her older brother Michael, and her younger sister, Anne were raised with strong ties to the Greek Orthodox church and were proud of their Greek heritage. Mary fondly remembered her time at dances and other church events in her childhood despite the hardships of the Great Depression. The family relocated to Trenton in the 1930's and Mary graduated from Trenton High School in 1939. She loved to learn and was instrumental in encouraging her younger sister through her education. Mary went into secretarial work after high school and worked for General Motors for many years before finishing her career in the Lawrence Township Public Schools. She most enjoyed seeing and helping the students who would come into the office at Lawrence Intermediate School. She was skilled in short-hand and, even after retirement in 1994, was never far from a steno pad full of notes and reminders for herself and her family. An avid reader, Mary often frequented the library, always looking for the new best sellers and classics alike. Mary was partial to biographies and historical fiction but was known for impressing library volunteers with her willingness to read almost anything. She loved yard sales, keeping up with the news and trends, and she firmly believed in wearing jewelry and lipstick every day. Mary continued to support the Saint George Greek Orthodox Church throughout her life as a part of the Maids of Athena, Daughters of Penelope, and St. George Seniors. She was always sure to secure a spot working at the White Elephant during the annual St. George Greek Festival. Mary enjoyed bridge and played with family and friends throughout her life. She and a group of cousins and friends gathered regularly for Sewing Club for many years. The Sewing Club members turned their interests to stocks, forming the Yardley Ladies Investment Club. Mary enjoyed her years in the club, and continued to follow the stock market throughout her life. She treasured her time spent with family, and with friends whom she considered family. All who knew her fondly recall the warmth, good food, and fresh pot of coffee that they always found in her loving home. Mary and her sister Anne were inseparable. The two lived together from Anne's birth in 1929 until Anne's death in 2021. They were overjoyed when their brother married and they became aunts. They shared many adventures at the beach, in New York City, and at home with their nephew and niece, James (Jimmy) and Carole, whom they dearly loved. Mary, Anne, and their mother moved to Lawrence Township in 1960 after her father, James, passed away. They would live in this home for the rest of their lives. Mary's greatest adventure began in January 1964 when she met Angelo Paratheras; they married in June of that year. Their family was complete when, in 1967, they welcomed their daughter Nicolette (Nikki). Mary was an involved and dedicated mother. She not only connected her daughter to her family traditions but also encouraged her to expand her horizons and achieve her dreams. When Nikki married Richard Hendricks in 1994, the Hendricks family quickly became a beloved extension of Mary's own family. Her two grandchildren, John and Angela, brought the greatest joy to her life. John and Angela will never forget the card games, love, laughter, and support they received from their grandmother. They always knew that the candy drawer would be full and that they would be encouraged to take more than one piece during their frequent visits to Yiayia's house. Mary is predeceased by her cherished parents, James and Katy Blazakis, her loving husband Angelo Paratheras, her beloved brother Michael and sister-in-law Sophie, her devoted sister Anne, and her dear nephew Jimmy. She is survived by her daughter Nicolette Hendricks, son-in-law Richard, her grandchildren, John and Angela, her niece Carole, and an extended network of great nieces, great nephews, cousins, and godchildren. On behalf of Saint George church, the family requests that all those who would like to pay their respects please wear a mask. In lieu of flowers, donations can be made to Saint George Greek Orthodox Church or Trenton Area Soup Kitchen (trentonsoupkitchen.org/ways-to-give/ ).

Mary Blazakis Paratheras passed away on February 1st, 2022 at the age of 98. The longtime Lawrence Township resident was born and raised in New Brunswick, New Jersey to Katy and James Blazakis. Mary, her older brother Michael, and her younger... View Obituary & Service Information

The family of Mary Paratheras created this Life Tributes page to make it easy to share your memories.

Send flowers to the Paratheras family.