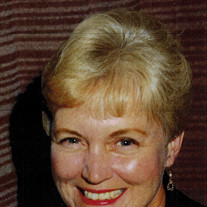 Meredith May (Wright) Martin, 73, of West Trenton, New Jersey passed away beside her loving husband, Bruce and her son George Alexander Martin also of West Trenton after a long illness, Cortical-Basil Degeneration. They recently celebrated their 50th Wedding Anniversary on October 29, 2016 in the ER of Capital Health Hopewell as a result of a deer running into their van on their way to dinner to celebrate their 50th with friends. Meredith was predeceased by her parents, Karl Tobias and Elizabeth Alberta (Aaronson) Wright of West Trenton, and her husband's parents, Joseph E. and Stella Martin. Her father- in-law was the District Magistrate of Hellertown - Lower Saucon Township outside of Bethlehem, Pa. from 1965 to 1979 having to retire at age 70. Prior to his election to the District Magistrate's Judgeship, Joseph E. Martin was a part-time Justice Of The Peace for over 40 years as well as a steel worker for Bethlehem Steel Company. Besides her husband and son, George, Meredith is survived by her daughter-in-law, Laura Marie (Falcone) Martin and her two grandsons, Austin Alexander and Logan Gabriel Martin of West Trenton, N. J. She is also survived by her brother, Dean K. Wright of New Hope, Pa. and his wife, Linda and daughter Rhonda Marie Wright. Meredith spent her first five years living in Mercerville, N. J. before her parents moved to West Trenton soon after her father, Karl T. Wright, built and opened his convenience store called the "Handy Shop" at 72 West Upper Ferry Road. Her mother, Elizabeth Alberta Wright was a nurse. Meredith began working as a waitress in her father's store at age 12. After graduating from Ewing High School in 1961, she attended Rider College for her freshman year before transferring to Susquehanna University in Selinsgrove, Pa. While there she was a member of the Alpha Delta Pi Sorority. Meredith graduated from Susquehanna University in June 1965 with a Bachelor's Degree in Business Administration and a major in Marketing. She started her business career with the American Cyanamid Company Agricultural Research facility in Princeton, N. J. in October of 1965. The Princeton facility was responsible for research and development of agricultural related drugs for the animal and plant industries worldwide. She was hired as a clerk because she was told that the company did not recognize college degrees in business administration for women. This was the "Real Glass Ceiling" that women faced in the mid 60's in Corporate America. A few years later she was appointed to a professional position as a technical writer. Meredith and her husband, Bruce, met while taking a graduate course, Secondary School Curriculum at Trenton State College which is now the College of New Jersey. Her husband, Bruce is a graduate of Rider College, and was employed as an accountant for the New Jersey Department of Education. She earned her MBA in Business Administration from Rider College in 1982. At the time she was the Manager, Global Regulatory Affairs Department, Animal Industry Research and Development. Her responsibilities included all aspects of animal product registrations with the U. S. Food and Drug Administration in Washington, D.C. She did extensive traveling to the FDA outside of Washington D.C. on a weekly basis. Her next promotion was to the Director of Information Technology a few years later. She traveled extensively again for Cyanamid in Great Briton, Germany, France and Italy. She ended her career in January 1999 as she took a buy-out from American Home Products, the company that bought out American Cyanamid in the early 1990"s. At the time of her retirement, her son, George, said that he now has a "Real Mom" because she was home when he finished his last of four years at the Lewis School and Clinic in Princeton, N.J. and then his three years at Ewing High School and the Mercer County Vocational School in West Windsor. Although her illness had a devastating physical effect on her body, she maintained all of her mental cognitive abilities. She had tremendous pleasure seeing her two grandsons grow, learn to walk and talk. She loved gardening, cooking, reading and traveling. She also enjoyed flying to visit friends with her husband, Bruce, who was a Certified Flight Instructor for 15 years. Her funeral will be at the West Trenton Presbyterian Church at 490 Grand Avenue in Ewing Township, New Jersey on Wednesday, July 12th. Calling hours will be from 10:00 am to 11:00 am. Burial will be at the Ewing Church Cemetery 100 Scotch Road, Ewing, New Jersey 08628. Funeral arrangements the Murphy Funeral Home of Ewing, New Jersey. Please visit www.murphyfh.com for additional information. She will be deeply missed by all who knew and loved her. In lieu of flowers, please make a donation in Meredith's name to the West Trenton Presbyterian Church at 490 Grand Avenue West Trenton, New Jersey 08628.

Meredith May (Wright) Martin, 73, of West Trenton, New Jersey passed away beside her loving husband, Bruce and her son George Alexander Martin also of West Trenton after a long illness, Cortical-Basil Degeneration. They recently celebrated their... View Obituary & Service Information

The family of Meredith M. Martin created this Life Tributes page to make it easy to share your memories.

Send flowers to the Martin family.