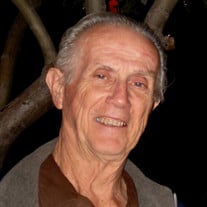 Merle Morgan Cleeton, 94, passed away on the 27th of May in New Jersey. Merle was born on March 4th, 1928 in Pittsburgh, PA, the son of Glen Uriel Cleeton and Jennie Frances Terry. He notes in an autobiography that he wrote in 2005 that he was named after a publisher of the American Magazine in which his father, Glen had his first article published in March of 1926. His middle name was his paternal great-grandmother's maiden surname (Frances Mary Morgan). Merle graduated from Peabody High School in Pittsburgh in 1946 and obtained his B.S. degree from Grove City College in 1949. He received an M.S. degree from the Carnegie Institute of Technology in 1956. Beginning in 1950 Merle served for 2 years in the Army at the United States Army Engineer Research and Development Laboratory in Fort Belvoir, Virginia. He was employed by the United States Steel Corporation in Pittsburgh for nearly 30 years. Merle most recently lived in Pennington, New Jersey with his wife Marilyn but has lived all over the country during his 94 years including Pittsburgh, Butler, Gibsonia, Pennsylvania, Troy, Michigan, Dover, Delaware, and Ewing, New Jersey. Merle always had a love of Ford Model A automobiles. Over his lifetime he owned 3. The first, a truck, was rescued from the family Slippery Rock farm. The second was purchased for $300 when he was married to his first wife Lois. The final 1929 Model A was purchased as the "baby" in 1976. His youngest daughter Christa, the "other baby" now owns that car. Merle also passed the old car bug to his son Lawrence who owns antique cars. Merle was the last remaining founding member of the Butler Old Stone House Region of the American Automobile Club of America. He also loved to spend his spare time as an AACA Judge. He started in 1981 and traveled to shows in Arizona, California, Pennsylvania, Delaware, Virginia, Tennessee, and more. He finished judging a few years ago with a total of 111 credits. Merle also had a strong love of antique furniture and restoring it to its original condition. This love developed into a business, Cleeton & Associates, which he ran out of the home in both Michigan and Delaware. He was predeceased by his siblings Mary, Glenna, and Alan. He is survived by his wife, Marilyn Docherty Cleeton, children Linda Arnold, Lawrence (Alice) Cleeton, Ron (Tammie) Cleeton, and Christa (James Cialdella) Cleeton, his first wife Lois Ammon, and four grandchildren David Cleeton, Michael Cleeton, Rebecca Cleeton, and Samuel Cleeton. In lieu of flowers, the family asks that donations be directed to the Butler Old Stone House Region of the Antique Automobile Club of America. Direct donations to Treasurer Doug Dawes, 116 Silver Dr., Renfrew, PA 16053.

Merle Morgan Cleeton, 94, passed away on the 27th of May in New Jersey. Merle was born on March 4th, 1928 in Pittsburgh, PA, the son of Glen Uriel Cleeton and Jennie Frances Terry. He notes in an autobiography that he wrote in 2005 that he... View Obituary & Service Information

The family of Merle Morgan Cleeton created this Life Tributes page to make it easy to share your memories.

Send flowers to the Cleeton family.