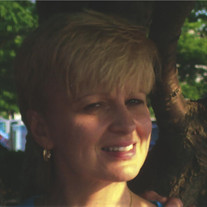 Michele Menges, 58, of Ewing, passed away on Sunday, May 5, 2019 in Philadelphia, PA. She was born on October 31, 1960 to Edward and Geraldine (Wierzbowski) Rafalski in Trenton. She was a graduate of Thomas Jefferson University in Philadelphia where she received her degree in Nursing. She would later complete her Master's Degree. Michele worked as a Cardiac Nurse for Deborah Heart and Lung Center for 33 years, where she was recognized as Nurse of the Year. She had a love for the outdoors, and being active. She also loved backpacking through Vermont, New Hampshire, Pennsylvania, and New Jersey, notably along the Appalachian Trail with her husband, Gene. Michele had an active lifestyle, including long distance biking, and would participate in charity rides for Anchor House. She loved traveling to Europe, taking many trips with her parents and daughter. An animal lover, she was also very passionate about animal rescue. Michele was a loving mother who made efforts to be vocal for those with special needs. She was preceded in death by her father, Edward Rafalski. Michele is survived by her loving spouse of 8 years, Gene Menges; her daughter, Jessica Vandegrift; her mother, Geraldine Rafalski; aunts, Stephie Stern and Dorothy Wszolek; and cousin, Andrea Stern. Visitation will be held Thursday, May 9, 2019, 5 - 9 pm at Murphy Funeral Home and Cremation Service, 1863 Hamilton Ave., Hamilton, NJ. Cremation will be private. In lieu of flowers, donations in Michele's name are suggested to Farm Sanctuary at P.O. Box 150 Watkins Glen, NY 14891. Online condolences can be given at www.murphyfh.com.

Michele Menges, 58, of Ewing, passed away on Sunday, May 5, 2019 in Philadelphia, PA. She was born on October 31, 1960 to Edward and Geraldine (Wierzbowski) Rafalski in Trenton. She was a graduate of Thomas Jefferson University in Philadelphia... View Obituary & Service Information

The family of Michele Menges created this Life Tributes page to make it easy to share your memories.

Send flowers to the Menges family.