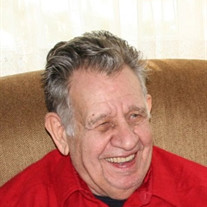 Paul V. Mitchell, 94, of Ewing passed away September 30th, at Greenwood House. Paul was predeceased by his parents Mary and John Mitchell of Wilmington, DE. Paul was a veteran of World War II, having served with the 4th Division of the US Marine Corps seeing action on Iwo Jima. After his discharge from the military, he graduated from Drexel University. Early in his career as a CPA he was employed by the international accounting firm of Wolf and Co where he became managing partner of their Trenton, NJ. office. Later, he had his own practice in Ewing Township. After retirement, he and Eve enjoyed winter months as snow birds, first in Cottonwood, AZ, and later in The Villages, FL. For years he was involved with volunteer organizations in the area, including Ewing Kiwanis, Boy Scout Troop #33 of the West Trenton Presbyterian Church, and Crescent Temple. He was a past president of the NJ Society of CPAs, and a member of the PA Institute of CPAs He also served on the Board of Directors of The Broad Street Bank and the Trenton Country Club. Paul was also a long time member of the Trenton Club. Surviving are his wife of 59 years, Evella R. Mitchell, a son Paul V. Mitchell, Jr, a son John R. Mitchell and his wife Monica, three grandchildren, Cody Lee Mitchell, Samantha and Evan Sciarrotta. He is also survived by his sister, Naomi Cooper and his brother Farley J. Mitchell, both in Florida, as well as many nieces, nephews and friends Arrangements are under the direction of M. William Murphy Funeral Home, Ewing There will be no viewing hours at this time. Burial service will be held at the Brig. Gen.William C. Doyle Veterans Memorial Cemetery in Arneytown, NJ on Wednesday, October 7, 2020 at 1:30 PM. Friends of the family are welcome to attend. In lieu of flowers, memorial contributions may be made to the West Trenton Presbyterian Church 490 Grand Ave, West Trenton, NJ 08628.

Paul V. Mitchell, 94, of Ewing passed away September 30th, at Greenwood House. Paul was predeceased by his parents Mary and John Mitchell of Wilmington, DE. Paul was a veteran of World War II, having served with the 4th Division of the US... View Obituary & Service Information

The family of Paul Mitchell Sr. created this Life Tributes page to make it easy to share your memories.

Send flowers to the Mitchell family.