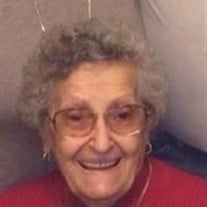 Penelope (Penny) Patsaros of Lawrenceville, NJ, passed away peacefully at home, on Tuesday, May 19th, 2020, as she always had wished. Born in Constantinople, Turkey, November 16, 1924, she traveled to the United States with her uncle at the young age of 20, speaking four languages and soon learned English as well. Her journey in the US started in Chicago, continued to Cincinnati, Ohio and finally she settled in Trenton, NJ where she met the love of her life, George, while she was working as a cashier at the Famous Restaurant in Trenton, where he was a chef. They married in January 1952, and were together for twenty-five beautiful years. She worked for many years at McGraw Hill Publishing Company until her retirement. Then in retirement, she worked for many years at Colonial Farms in Washington Crossing, PA. To this day she would hear from her beloved customers that she saw each and every day. She was a devoted member of the St. George Greek Orthodox Church for 68 years, served on the Parish Council, a member of the Sts. Anargyroi Philoptochos Society, loved working the annual Festival and she was the "lady that made the Kolyva" (memorial wheat) and the Anthidoro for her church for many years. She enjoyed her many, many plants, had a true "green thumb", enjoyed knitting, cooking and believed strongly in the power of prayer. Many people have enjoyed the fruits of her labor throughout the years. She was known and loved by many as Yiayia Penny. Predeceased by her parents, Stefano and Venetia Cortessa, her five siblings, Despina, Smaro, Martha, Theodora and Evangelos, her husband, George, she is survived by her three children, Vanetta and her husband, Pericles; John and his wife, Patricia; and Smara and her husband Brian; her six grandchildren, Penelope and her husband Wylie, Evangelos and his wife Holly; George, Nicole and her husband Shaun; Ian and Alexandra; and six great-grandchildren, Venetia and Athan; Viviana; Niko; Sophie and Elise and many cherished friends. Funeral services will be under the direction of William M. Murphy Funeral Home, Ewing, NJ, at the St. George Greek Orthodox Church with the burial immediately after, at Greenwood Cemetery, however, due to the current crisis, will be held privately. A celebration of her wonderful life will be announced at a later date. Donations may be made in her memory to St. George Greek Orthodox Church, 1200 Klockner Road, Hamilton, NJ 08690.

Penelope (Penny) Patsaros of Lawrenceville, NJ, passed away peacefully at home, on Tuesday, May 19th, 2020, as she always had wished. Born in Constantinople, Turkey, November 16, 1924, she traveled to the United States with her uncle at the... View Obituary & Service Information

The family of Penelope Patsaros created this Life Tributes page to make it easy to share your memories.

Send flowers to the Patsaros family.