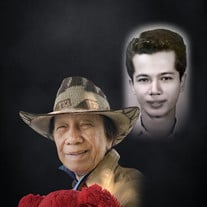 Reynaldo Nera Obed, 88, passed away peacefully, with his daughter beside him, on Thursday, September 24, 2021 in his home in Ewing. Since Rey's diagnosis of pancreatic cancer, he decided to live his life, as if, he were not sick. He wanted to enjoy what was left of his time on Earth with dignity and grace. He never discussed the disease with anyone, and, until he passed away, he did just that. Even traveling to West Point, NY and spending time with his beloved daughter up until early September. Born in Midsayap, North Cotobato, Philippines in 1933 to the late Antonio and Leonor (Nera) Obed. He left the Philippines in 1973 and settled in Willmington, Delaware. He later lived in Lawrenceville and in the Island District of Trenton, before settling in Ewing in 1979. He attended college at the University of the Phillipines at Los Banos, Laguna, where he majored in Agriculture and received a Bachelor of Science degree. He was also a member of the Beta Sigma Fraternity. Rey attended the Beta Sigma reunions in San Fransisco, Las Vegas and Toronto. In the Phillipines, Rey was a part of the Atomic Energy Commission, studying under and working with Dr. Julian Banzon. Dr. Banzon was named as a national scientist of the Phillipines. He began to concentrate his studies on sugar chemistry, and the production of ethyl ester fuel from byproducts of coconut oil and sugarcane. In 1966 he was welcomed at Oxford University, England as a Recognized Student and Graduate Fellow, where he continued his studies in Chemistry and Radiochemistry. Rey was also a part of the Oxford University Alumni Society, where he attended all the NY events. Rey landed a career with the NJ Department of Environmental Protection as a Radiation Physicist with the Bureau of Radiation Protection; and later a 45 year career with the NJ Department of Health as one of the few research scientists in the radio analytical services laboratory where he specialized in radioactive isotopes and isotopic uranium. He continued to present scientific papers on naturally occurring radioactive isotopes in gross alpha particles, often in collaboration with his supervisor, Dr. Bahman Parsa. He would have retired, formally, on December 31 of 2021. Rey was a longtime parishioner of Our Lady of Good Counsel Church, West Trenton, serving as a member of the Knights of Columbus and attending Adoration of the Blessed Sacrament. He loved ballroom dancing, reading, gardening and traveling to places like Scotland, Canada, England, Portugal, France, Spain and Italy. He even made pilgrimages to Lourdes, Fatima and Rome. Rey never left the house without his cowboy boots and hat. He was especially fond of Classic American Movies. His favorites starred John Wayne, Gary Cooper and Clint Eastwood, he could answer any trivia question about any classic movie. James Bond films were a must see for Rey, and he eagerly awaited the final film starring Daniel Craig, coming in October. We can be reassured that he will be viewing from above! Rey met the love of his life, Josefina Villegas at the University of the Philippines, Los Banos, where they were both students of Josefina's father, Dr. Valente Villegas, professor of Animal Husbandry. The Villegas residence was a popular hub of student socials, and Rey frequented the place. They enjoyed 43 years of marriage until, she passed away in 2012. He is also predeceased by his brothers Paulino and Fransisco. He is survived by his loving daughter; Leonora Rita Obed, his siblings in the Phillipines; Antonio, Emmanuel and Celia Obed, as well as, many nieces, nephews, cousins and friends, both in America and the Phillipines. A visitation will be from 10 am to 12 noon, followed immediately by a prayer service, at the Murphy Funeral Home, 935 Parkway Avenue, Ewing, NJ 08618 on the 1st of October 2021. Entombment will follow at St. Mary's Cemetery/Mausoleum in Hamilton, NJ. In lieu of flowers, memorial contributions may be made in Rey's honor to: Our Lady of Good Counsel Church, 104 West Upper Ferry Road, West Trenton, New Jersey 08628 www.murphyfh.com

Reynaldo Nera Obed, 88, passed away peacefully, with his daughter beside him, on Thursday, September 24, 2021 in his home in Ewing. Since Rey's diagnosis of pancreatic cancer, he decided to live his life, as if, he were not sick. He wanted... View Obituary & Service Information

The family of Reynaldo Obed created this Life Tributes page to make it easy to share your memories.

Reynaldo Nera Obed, 88, passed away peacefully, with his daughter...

Send flowers to the Obed family.