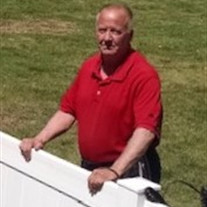 Richard (Dickie) J. Small, 66 of Hamilton passed away on Easter Sunday, April 4, 2021 at Hamilton Continuing Care in Hamilton. Born in Trenton to the late John H. and Mary Lou (Horan) Small, Richard lived in the Hamilton area his entire life. He graduated from St. Anthony's High School class of 72'. He attended Mount St. Mary's College and received his Bachelor of Science in Business Administration (BSBA) degree from Trenton State College. During his career he worked at Mercer Hospital in Trenton and Boehringer-Ingelheim as an accomplished pharmaceutical representative where he retired. After retirement he worked for a few years with the Hamilton Township Department of Public Works. Since the age of 7 he was actively involved in sports. Richard began playing organized sports for the Tiny League, Hamilton Little Lads, and later played in the Hamilton Babe Ruth League where he earned All Star Honors in all three leagues. He attended St. Anthony's High School and excelled in baseball where he was a member of the St. Anthony High School Parochial A State Championship Baseball Team (1972) and earned All County honors in Cross Country. During the summers in the 1970's he played for American Legion baseball for Broad St Park Post 313 and was named to the team of the Decade at first base… Richard's passion for playing sports continued at Division 1 Mount St. Mary's College where he was a Northeast Conference Selection in baseball and soccer for two years. He became well known around Mercer County for his affiliation and love of sports. After college he became an active player in recreation softball. He was a lead-off hitter with a great swing and a superior outfielder known for his great speed. He played with some of the top teams in the area. In 2006 he was inducted into the Trenton Softball Hall of Fame. Richard also gained a lot of notoriety in flag football where he was a team member of Jo-Jo's Tavern. He was also the head referee at 8 flag football state finals and the head official of the Central Jersey Flag Football League for 10 years. He also has officiated high school soccer, baseball, and basketball for 15 years. A college baseball umpire and was selected as Major League replacement umpire during the Roberto Alomar spitting incident in the 1990's. His favorite teams were the New York Giants and New York Yankees. Richard was a proud "Dad" and loving "Pop-Pop" and best friend to his dog Riley. Richard is survived by his twin daughters, Lauren and her fiancé Julian Diaz of Bordentown, Jennifer and her husband Rob Lord of Hamilton, his granddaughter Lauren Maria of Hamilton, his sister Jill Moyer and husband Jeff of Hamilton, Nephew Ian Z. Moyer and his fiancée Sabrina Distad of Naples Florida. Uncle- Robert (Bob) Horan of Hamilton, Aunt- Nancy Horan of Ewing. Many cousins and friends including his first friend and neighbor Rick Dell. The family will receive visitors on Saturday, April 10, 2021 from 8:00 am to 10:00 am at the Murphy Funeral home 1863 Hamilton Avenue, Hamilton. At 10:30 a.m. a funeral mass will be celebrated at St. Raphael Roman Catholic Church of the St. Raphael - Holy Angels Parish 3500 S. Broad St. (Corner of S. Broad and Gropp Avenue). Hamilton, NJ. Interment will follow at St. Mary's Cemetery, 1200 Cedar Lane, Hamilton, NJ 08610. Richard's family has requested that in lieu of flowers that memorial donations be sent to the attention of Donielle Killian-Giora at the Hamilton Animal Shelter and Adoption Center, 2100 Sylvan Avenue, Hamilton, NJ 08610

The family of Richard J Small created this Life Tributes page to make it easy to share your memories.

Richard (Dickie) J. Small, 66 of Hamilton passed away on Easter...

Send flowers to the Small family.