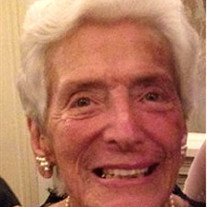 BAY HEAD - Sally Kuser Lane died June 7 at her family home here. She was 95 and had battled declining health since late September. A striking woman who was an athletic 5 feet, 11 inches tall, she was the first grandchild of James and Sarah... View Obituary & Service Information

The family of Sally Kuser Lane created this Life Tributes page to make it easy to share your memories.

Send flowers to the Lane family.