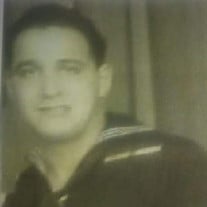 Stanley S. Vitale, Sr. age 87, of Ewing, passed away peacefully at home on June 8, 2017 surrounded by his loving family. He proudly served his country in the US Navy during the Korean War. Stanley was a licensed electrician and owned Vitale and Sons Electric. Stanley retired from Princeton University in 1996 as the administrator of buildings and grounds for the Forestall campus. There was so much in this life Stanley was passionate about; including collecting and flying flags. Stanley loved to play cribbage, and enjoyed sitting in his sun room in Florida. He excelled at everything he set out to do while working for the betterment of humanity and community. Some notable achievements of Stanley's include founding the Lou Gerhig's League in Ewing, the Central Jersey Electric League, and the Central Jersey Electric Scholarship. He will be remembered by his family as loyal, loving, and always willing to help. Stanley will be deeply missed. Stanley is predeceased by his parents, Angelo and Mary Vitale. He is survived by his beloved wife, Sally Vitale (nee Lucido); sons, Stan Vitale, Jr. and his wife Gina, Gasper Vitale, Sr., and Joseph Vitale and his wife Carin; brother, Angelo Vitale and his wife Jackie; grandchildren, Gasper Vitale, Jr., Heather Rose Vitale, Nicholas Ryan Vitale, and Danielle Jo Vitale; great grandchildren, Alexandra Zaburski, Christopher Zaburski, and Nydia Patterson; and great grandchild, Avian Patterson. Relatives and friends are invited to attend his visitation on June 13, 2017 from 8:30am-10am at Murphy Funeral Home, located at 935 Parkway Ave., Ewing, NJ 08618. A funeral ceremony will begin at 10am at the funeral home. Stanley will be laid to rest at St. Mary's Mausoleum in Hamilton, NJ. In lieu of flowers, memorial donations can be sent to the Stan Vitale Scholarship Fund at Mercer County Technical School, located at 1085 Old Trenton Rd., Trenton, NJ 08690. To post photos, share a memory, or send an online condolence, please visit www.murphyfh.com.

Stanley S. Vitale, Sr. age 87, of Ewing, passed away peacefully at home on June 8, 2017 surrounded by his loving family. He proudly served his country in the US Navy during the Korean War. Stanley was a licensed electrician and owned Vitale... View Obituary & Service Information

The family of Stanley S. Vitale, Sr. created this Life Tributes page to make it easy to share your memories.

Send flowers to the Vitale family.